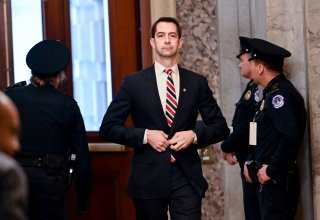 Republican Sen. Tom Cotton said Monday that his Democratic colleagues are holding up the Senate’s coronavirus bill so they can push green energy policies, among a slew of other “radical” measures.

The Arkansas senator railed against his colleagues, telling his Twitter followers that they were putting Americans’ lives at risk over global warming. His criticism came after Senate Democrats failed to pass a procedural cloture vote on a phase-three coronavirus stimulus bill.

“This report is correct. Pelosi & Schumer are willing to risk your life, your job, your retirement savings for a radical, left-wing wish list that has nothing to do with this virus. Disgraceful,” Cotton told his Twitter followers Monday after senators failed to hash out an agreement.

Democrats on the House select committee were among the first to ask leadership to consider climate change before jumping into the legislation.

“In responding to this crisis, we must be careful not to exacerbate the ongoing climate crisis,” Democratic Reps. Kathy Castor of Florida, Ben Ray Luján of New Mexico, and Jared Huffman of California wrote in a March 20 letter to House Speaker Nancy Pelosi.

They want any such bill helping the aviation industry to include “adoption of low-carbon fuels, support for greenhouse gas efficiency standards, and/or electrification of ground support equipment at airports.”

“We must strongly oppose misguided or surreptitious attempts to boost polluters at the expense of the public health. Instead, we should look for solutions that can also move us toward a clean energy economy and to a healthier, stronger and more just America,” they wrote. “We have a few ideas.”

Phase-three of the Senate bill would give $1,200 checks to every American, with married couples receiving $2,400. That check will go to Americans making less than $75,000 per year. Income earners who make above $99,000 would not receive any money.

Some activists argued for using the country’s Strategic Petroleum Reserve as leverage.

“The Republican COVID Stimulus 3 bill does include funds to purchase oil for the SPR. That’s the leverage to get ITC with direct pay/cash grant included,”Jigar Shah, co-founder and president of Generate Capital, said in a tweet Monday.

“I think there is an outside chance we could get the ITC with direct pay on COVID Stimulus 3. As long as the SPR money is in play, we have a chance,” he added, referring to the bill, which contains the $3 billion in the Department of Energy requested Friday to restock the SPR with low-priced oil.

The DOE’s move came after crude prices fell into the $30s as the Saudis push for a cut in output to prop up prices before Russia insisted flooding the market with hundreds of thousands of barrels of oil. Moscow is worried the United States will use shale oil to take advantage if Saudi Arabia ease off production. Oil prices have hovered around $30 per barrel ever since.