Diversity and Inclusion Barriers in Peace and Security are Slowly Breaking 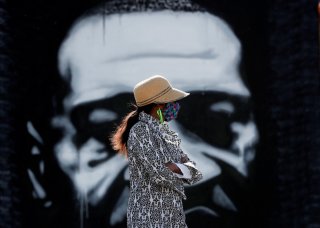 Just over a year ago, in the wake of the murders of George Floyd, Breonna Taylor, and others, and national protests for racial justice, many organizations began to take a hard look at how their structures and systems perpetuate, or at minimum contribute to, racial inequalities.

In the national security and peacebuilding spaces, Women of Color Advancing Peace, Security & Conflict Transformation (WCAPS) drew together leaders across the international peace and security space committed to change in their field. On the latest episode of the Press the Button podcast, Shalonda Spencer, the Executive Director of WCAPS, and Maher Akremi, the project lead for OrgsInSolidarity, spoke with co-host Michelle Dover about the progress made thus far to achieve diversity, equity, and inclusion, and the barriers that remain.

In response to an outpouring of support for systemic change, the OrgsInSolidarity initiative created a community of organizations dedicated to advancing twelve commitments to achieve their goals. Leaders across the peace and security space signed on to these through a joint statement. But, before this work could truly make progress, they needed to understand the field. The OrgsInSolidarity team surveyed the community and released their results in a Baseline Survey Report, published last month. The survey, titled Standing Against Racism and Discrimination, sheds light on the reality of the work it takes to improve diversity, equity, and inclusion.

While the answers remain anonymous, Akremi says, “the anecdotes are really honest.” For instance, when asked how issues of discrimination are addressed within organizations, Akremi remembered, “one of the answers was literally—the blatant is punished, the subtle is ignored.” Spencer notes that the benefit of these surveys is not only that organizations can learn from each other, but that they are a useful form of accountability for staff and leadership, and can spur conversation.

When asked about his biggest takeaway from the survey, Akremi notes that a year is “a long time for [organizations] to sustain their efforts.” He explains that for some organizations, “entropy is taking hold, and in a lot of ways, people are burning out because it's hard to always be trying to work on these issues.” From this, Akremi learned that “we have to redouble our efforts, we have to stay engaged because one year doesn't fix these problems, one year makes organizations better, one year makes individuals better, but it does not change [the] field, it does not change systems.”

Spencer points out that “organizations have to be honest with themselves as far as work, culture, and the racial discrimination issues that they may have.” The biggest thing she has learned is that creating more equitable workspaces “takes a lot of work, it takes a lot of effort, but most of all it really takes honesty.” Individuals and organizations must ask themselves hard questions to do this transformational work because it takes a lot of time to permanently fix the systemic roots of these problems.

Moving forward, Spencer’s goals in the next five years are to connect domestic and international policy, grow WCAPS within the United States and its international chapters, and “network with women who are on the ground, fighting on these issues, that we don’t often think about.” Her hope is this work will also help increase the number of women of color in the international and government policy space, building on the legacy of WCAPS founder Ambassador Bonnie Jenkins. Despite the challenges that remain, Spencer is hopeful. “More organizations are creating spaces for these conversations to happen about racial equity,” she said, “[and] we're…hoping that we can continue to do this work alongside with them.”

The entire interview with Shalonda Spencer and Maher Akremi is available here on Press the Button. Visit WCAPS and OrgsinSolidarity to learn more about their initiatives and become a member. You can find their Baseline Survey Report here.