This Is the Division Leading the U.S. Navy’s Hypersonic Charge 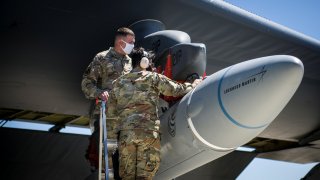 In the past, NSWC Dahlgren used capture German technology to evaluate the feasibility of using hypervelocity guns to defend against missiles and strategic bombers. During the early years of the Cold War, Dahlgren also evaluated missile trajectories for the Army’s Ballistic Missile Agency. Dahlgren also tested several other experimental weapons platforms for the Navy throughout the 1970s, including one gun-launched ramjet that nearly flew hypersonically.

Today, NSWC Dahlgren is “applying its deep knowledge of advanced gun systems, guided projectiles, and telemetry to support hypersonic research and development,” according to a Navy statement. “For example, scientists and engineers are developing advanced guidance and control for future hypersonic systems.”

“NSWCDD recently conducted the first of several planned tests by launching a conical projectile, dubbed Hypercone, to collect aerodynamic and aerothermal data relevant to hypersonic flight conditions,” according to the statement. “Dahlgren also has multiple efforts focused on accurately modeling the flow around a hypersonic vehicle. Recently, Dahlgren’s hypersonic efforts have expanded to include roles in the development of offensive missile boost-glide weapons and other collaborative efforts across the DoD.”

Although NSWC Dahlgren is nominally a Navy outfit, the work the division does could be leveraged by the Army and Air Force and adapted for land- or air-based hypersonic weapon variants, per the Navy statement.

Some commentators likened the event to the United States’ Sputnik moment when the Soviet Union’s first space satellite launch prompted a substantial American focus on outer space and winning the space race.

The Navy’s statement ended on an upbeat note and explained that “Dahlgren has an established history of hypersonic work” and a proven track record with the Navy. “We are working the challenges of hypersonic flight and weapon systems integration, and we will lead the development and fielding of naval defensive and offensive hypersonic systems to keep our Navy the best in the world.”