Does This Grainy Video Show a UFO? Nope, Just 2 Amazing B-2 Stealth Bombers. 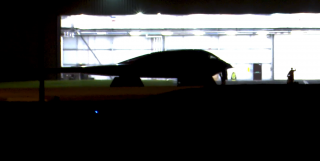 These jets are of course from the 509th Bomb Wing (BW).

“DEATH13 (Spirit of Mississippi) arrived around 20 minutes later but I missed shooting it as all my gear was packed away! This was pretty much as close to seeing a UFO as it gets I think!,” Ramsay explains.

“It seems that they are not taking part of the annual Ample Strike exercise but are here on their own exercise. B-52s should be coming in later this week by all accounts,” he points out.

Noteworthy the length of stay for the B-2A Spirits at Fairford is not known yet.

The 509th Bomb Wing, located at Whiteman Air Force Base, Missouri, is one of only two Air Force units to operate the B-2 Spirit stealth bomber. The unit can launch combat sorties directly from Missouri to any spot on the globe, engaging adversaries with large payloads of traditional or precision-guided munitions. The first combat use of this capability was during 1999, as part of Operation Allied Force, the air campaign over Serbia and Kosovo.

The 509th also led the way for America’s first military response following the terrorist attacks on New York and Washington D.C. in September 2001. B-2 bombers were the first U.S. aircraft to enter Afghan airspace in October 2001, paving the way for other coalition aircraft to engage Taliban and Al Qaeda forces. During this operation, the aircraft flew roundtrip from Missouri, logging combat missions in excess of 40 hours – the longest on record.