Does This Image Really Show A Bahamian Town Destroyed By Hurricane Dorian? 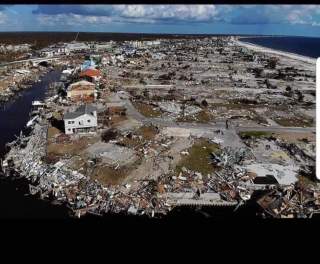 “Once Dorian passes, please don’t forget those much less fortunate than you,” reads the caption. “They have lost everything. Literally, everything!”

The photo does show a coastal town devastated by a hurricane, but it is actually Mexico Beach, Florida, in the wake of Hurricane Michael in 2018.

Hurricane Dorian has been moving northward toward the U.S. after stalling over the Bahamas, reported The New York Times.

The slow-moving storm battered the Bahamas with high winds and floodwaters for more than a day, killing at least seven people, according to CNN. It was a Category 5 hurricane over the weekend, but has since been downgraded to Category 2 (at the time of publication on Sept 4th).

Some conveyed their sympathies regarding the situation, with numerous people sharing the alleged picture on Facebook.

The image does not, however, depict the Abaco Islands town of Marsh Harbour in the Bahamas. Taken by Getty photographer Joe Raedle, it shows the damage caused by Hurricane Michael in Mexico Beach, Florida, in 2018, according to the caption.

“The aftermath of hurricane Michael is seen on October 17, 2018 in Mexico Beach, Florida,” reads the Getty Images caption. “The hurricane hit on October 10th along the Florida Panhandle as a category 4 storm causing massive damage and claimed the lives of more then [sic] a dozen people.”

Hurricane Michael was the first Category 5 hurricane to make landfall in the contiguous United States since 1992 and the strongest on record to ever hit the Florida Panhandle, according to the National Oceanic and Atmospheric Administration.