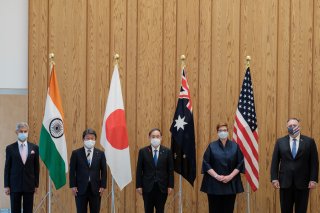 On August 31, Deputy Secretary of State Stephen Biegun told an Indian audience that the “Indo-Pacific region is actually lacking in strong multilateral structures.  They don’t have anything of the fortitude of NATO or the European Union.  … there is certainly an invitation there at some point to formalize a structure like this.” This statement raises an important question: should the United States try to create an organization like the North Atlantic Treaty Organization (NATO) in the Indo-Pacific? In a word, no.

NATO is a multilateral military alliance between the United States, Canada, and twenty-five European countries. The call for similar multilateral cooperation among different states in the Indo-Pacific is motivated by a desire to respond to China’s provocations and secure the region’s democracies. As first steps to this end, the United States, Australia, India, and Japan have recently revived informal cooperation through the Quadrilateral Security Dialogue or the “Quad.” While policy coordination and military exercises among members of the Quad are helpful and should continue, pursuing an alliance like NATO is unwise.

There are three reasons to avoid emulating NATO in the Indo-Pacific. First, the potential members lack the shared interests that an alliance needs to succeed. Although members of the Quad, and many East Asian countries, are at odds with Chinese territorial claims, they have very different and specific concerns. For example, India faces disputes on its Himalayan frontier, while Japan is concerned with conflict over the Senkaku islands. An alliance like NATO might obligate Japan to fight if war broke out in the Himalayas, or India to go to war over a maritime dispute in the South China Sea. Attempting to create an alliance is thus a recipe for failed negotiations or alliance treaty violations. The members of a hypothetical Indo-Pacific alliance organization do have a common concern over China’s power plays in the region, but the scenarios for mutual benefit are too varied.

Second, a formal alliance, even between core members of the Quad, risks provoking China. A recent study by University of Michigan political scientist James Morrow found that forming a defensive alliance could provoke conflict when members have a history of conflict with the third party the alliance hopes to deter. This is exactly the situation in the Indo-Pacific region. A new alliance risks inflaming existing tensions, rather than protecting its members.

Finally, emulating NATO is unnecessary for the United States to promote security and prosperity in the Indo-Pacific. The United States already has alliances with Japan and Australia, in addition to defense pacts with the Philippines and South Korea. Upholding and strengthening these bilateral commitments eliminates any need to take on expensive new alliance commitments.

There is also an easier way to promote multilateralism in the Indo-Pacific. The United States already built a meaningful multilateral structure in East Asia through the Trans-Pacific Partnership (TPP), only for President Trump to abandon it. Biegun argued that this trade agreement “fell under the weight of excessive ambition.” If that is true, advocates of an Indo-Pacific alliance organization should reassess the invitation to create strong multilateral structures like NATO. Forming a military alliance like NATO is perhaps more ambitious and consequential than the TPP. If the United States really wants to promote multilateralism, rejoining the TPP is a good place to start.

Does this discussion overstate U.S. ambitions? After all, Biegun also noted that he “would be careful not to be too ambitious.  … remember, even NATO started with relatively modest expectations.” Unfortunately, this undersells the origins of NATO. Although NATO only had twelve members, compared to twenty-seven today, the allies were committed to and planned together for war with the Soviet Union from the beginning. If the United States wants deeper cooperation among democracies in the Indo-Pacific region, but not a multilateral alliance treaty, then referencing NATO is misleading and irresponsible.

To conclude, the lack of “strong multilateral structures” in East Asia is not an invitation to create them. An Indo-Pacific NATO is more likely to collapse or provoke China than promote security and prosperity in the region. Instead of pushing for a pale imitation of NATO, the United States should focus on upholding and strengthening existing alliance commitments and building cooperation in other areas.

Joshua Alley is a Postdoctoral Research Associate at the University of Virginia’s Democratic Statecraft Lab. He holds a Ph.D. from Texas A&M University and a B.A. from Gettysburg College.