Does It Matter That China Has More Warships Than the U.S.? 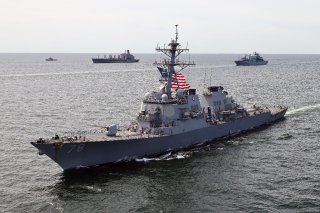 Raw numbers do not necessarily equate to maritime warfare superiority. The Chinese Navy is now not only larger than its American counterpart but also increasingly incorporates a wide range of advanced technologies. The growth of the Chinese Navy has made a number of headlines in the last year, seemingly suggesting that Chinese maritime power has surpassed that of the United States.

But the increase in Chinese warships does not necessarily mean that the People's Liberation Army Navy is yet comparable in capability to the U.S. Navy. Instead of focusing solely on scale, the U.S. Navy is working on Project Overmatch, an effort to establish a series of interfaces and common standards sufficient to enable high-speed data sharing across multiple platforms and domains.

Long-range sensors and weapons, coupled with artificial intelligence-enabled computers that connect the air, surface, land, and undersea domains, could allow a smaller yet more technologically capable force to prevail.

Raw numbers, therefore, are not the same thing as maritime warfare capabilities. There are many variables to consider, including the scope and security of multi-domain networking technology. Certainly, to quote Sun Tzu, “mass matters,” particularly when it comes to blanketing an area with incoming fire or spreading an offensive across wide swaths of ocean. However, it is quite relevant to also consider the tactical impact that long-range, multi-domain networking could have.

Should surface warships operate with a new generation of radar able to detect incoming threats at much greater distances and share information through an “aerial gateway” platform extending reach beyond the horizon, then a larger force could be seen and destroyed while the attacking force operated at standoff ranges. If fighter jets operating in forward locations are able to receive targeting specifics from drones, submarines, or surveillance aircraft, larger enemy attacking formations could be vulnerable from the air. And stealthy attack submarines operating with a new generation of quieting technologies and long-range precision sonar might be able to detect and destroy a large approaching surface fleet of warships.

The margin of difference in any major maritime warfare conflict, therefore, may be determined by the quality of multi-domain networking, information assurance, and the processing and transmission speeds necessary to significantly shorten the sensor-to-shooter time. If a slightly smaller, yet effectively networked force is able to process and transmit data and target specifics faster than an enemy, it might be well positioned to prevail.