Does the Navy Have What It Needs to Fire Its Next-Generation Weapons? 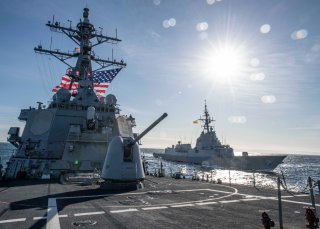 Lasers, long-range, maneuverable interceptor missiles, over-the-horizon attack systems, and paradigm-changing hypersonic missiles will all be fired from U.S. Navy surface ships in the future. Laser ballistic missile defense systems are even emerging as a possibility.

These evolving attack systems—including proven weapons such as Tomahawks, SM-3s, and drone and helicopter-killing lasers—will keep receiving upgrades well into the future. However, longer-range and more lethal weapons will likely emerge. The Navy and the Missile Defense Agency are working on power scaling lasers and integrating them with Aegis radar and fire control systems to perform ballistic missile defense missions. Could ship-fired lasers travel all the way into space? Incredibly, that no longer seems outside the realm of possibility.

For this reason, the Navy and the defense industry are attempting to supplement and enhance the already effective vertical launching systems (VLS) on Navy surface ships. New weapons, propulsion technologies, and energetics are rapidly emerging, generating a need for innovative launcher technologies. In the near term, this means engineering ways to support a fast-arriving generation of ship-launched hypersonic weapons. This is the fundamental premise informing Northrop Grumman’s innovative EJECT launch technology proposal, a system engineered to supplement VLSs and support hypersonic missiles and other larger ship-fired missiles and weapons.

“The bottom line is that the Navy's surface ship launcher technology is kind of at a crossroads," Roy Pascal, senior program manager at Northrop Grumman, told the National Interest in an interview. "The current system was designed nearly half a century ago, and while still an elegant solution, the technology is aging. And when you look at the future, large surface combatants—for example, the DDG(X), the Navy’s next surface combatant—they are being designed now and will be at sea late into the century. The Navy needs a launcher that enables increased lethality and has the flexibility to address new threats," Pascal said.

He added that the technological emphasis is to build on “hot-launch” technology by leveraging “mature eject technology.”