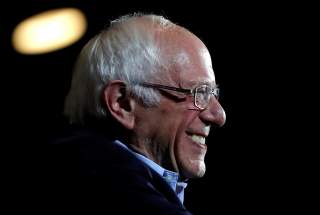 The “they” in this equation is the big-money donors, establishment politicians, pundits, campaign strategists, Wall Street tycoons, and health insurance executives the senator from Vermont has made a career savaging on a daily basis. But it also pertains to the rest of the Democratic presidential field, a cast of characters who haven’t been shy warning Democrats nationwide about the negative impact a Bernie Sanders candidacy would have on the party in November. But there is one, big problem each of them have: the Sanders train is moving fast, and the Joe Bidens, Pete Buttigiegs, and Elizabeth Warrens of the world are finding it very difficult to stop it.

In 2016, Sanders lost Nevada to Hillary Clinton by 5 points. Clinton, the eventual nominee, won women, African-Americans, voters over the age of 44, and those with college degrees. The demographic, age, and education breakdown in Nevada last night was very different than it was four years ago. According to entrance polls, Sanders won a plurality of men and women, a majority of Latinos, a plurality of whites, and a majority of voters under the age of 44. Sanders scooped up 43% of Nevada caucusgoers who never attended college, 32% who earned a Bachelor’s degree, and 22% plurality who earned an advanced degree. The results in Nevada were for all intents and purposes a sweep for Sanders, who struggled with non-white voters during his first run for the presidency but has now expanded his revolution to minority communities. He was the indisputable victor of the night, having won by such a large margin that the networks called the contest for him with just over 4% of the precincts reporting.

If Sanders was the insurgent in the 2016 race, he is the favorite in 2020. Polls have him tied for first-place in Virginia, up double-digits in California  and leading the pack in Texas. While polling can be notoriously fickle this early in the primary, you can’t blame the Sanders campaign for reading the surveys and smiling.

Sanders has three distinct advantages compared to the rest of the field. First, the senator has a built-in army of foot-soldiers across the country who are extremely dedicated to the 78-year old democratic socialist and his progressive agenda, something Uncle Joe Biden doesn’t even have. Two, Sanders is stocked with cash, pulling in $25 million in January. Biden, Pete Buttigieg, and Amy Klobuchar don’t have the same fortunes and are fast dipping into the red. Third, he is a progressive competing against a pack of moderate Democrats who are carving up each other’s support. The Democratic primary is basically two separate contests: Sanders vs. the rest of the field and the rest of the field vs. itself. Buttigieg, Biden, Klobuchar, and Michael Bloomberg are duking it out for the label of moderate champion. As long as this slugfest continues, Sanders will be able to exploit the divisions and win states with a plurality of the vote.

As Bernie continues to put points on the board, moderate Democrats who would rather have Joe Biden as the nominee will have decisions to make. Do they, for instance, mount a Bill Kristol-style “Never Bernie” movement powered by multi-millionaire fundraisers to saturate the airwaves with anti-Sanders TV ads in the hope Democratic voters will be scared into line? So far, there is no suggestion that such an anti-Bernie campaign is being in progress. Sanders and Donald Trump may not have much in common philosophically and ideologically, but they both have a unique power to inspire and mobilize their supporters. The last thing the Democratic political establishment wants is to run an anti-Bernie crusade that fragments the Democratic Party before the general election.

Can anyone or anything stop Bernie Sanders from claiming the nomination? The answer is “of course.” Only three states have gone through the process. If Biden wins South Carolina by impressive margins, voters in the Super Tuesday states may give the former vice president a second look. Perhaps a scandal emerges in the future that provides Bernie's more moderate competitors with ammunition. Perhaps Bernie has a terrible debate a-la Bloomberg and gets panned by the pundits for 24-straight hours. Maybe he will find it hard to manage his new life as a frontrunner or the media scrutiny associated with it.

But at this early date, it sure looks like the 2016 runner up is in prime position to maintain his lead. If Bernie Sanders wins the majority of delegates in California, Texas, Virginia, and the other Super Tuesday states, his campaign could be on a glide path to the nomination. If this comes to pass, the Democrats who have been leading the party since the Clinton era will be entering a new world where they no longer hold the power.