Does the U.S. Military Really Need a $264 Billion Nuclear Missile? 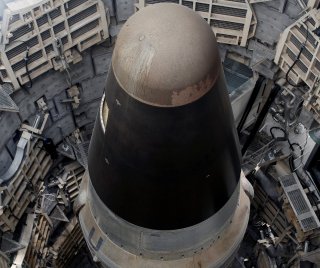 The Pentagon is reportedly working on a new generation of intercontinental ballistic missiles (ICBMs.) The Ground-Based Strategic Deterrent (GBSD) missile program is seen as the successor of the existing Minuteman III ICBMs, with the new ICBMs eying 2029 for initial deployment.

However, with a new administration in power in Washington and taking the usual new look at defense strategy, there have been multiple recent calls in the media to put the brakes on new ICBMs.

William B. Hartung, director of the Arms and Security Project at the Center for International Policy, wrote for Defense One this week that because the new ICBM is a “legacy system,” and the Biden Administration has hinted at wanting to cut spending on such systems, it’s time to cancel their development.

“There is one costly system that is not generally thought of in these terms but should be: the new ICBM — formally known as the Ground-Based Strategic Deterrent, but more accurately characterized as a money pit that adds nothing to our defense,” Hartung wrote. “ICBMs make the world a more dangerous place because a president would have a matter of minutes to decide whether to launch them in a crisis, thereby increasing the risk of an accidental nuclear war due to a false alarm.”

Hartung added that the Center for International Policy had recently published a report which referred to the “nuclear triad” of “air-, sea-, and land-based nuclear delivery vehicles” as “a relic of the 1950s and 1960s that was developed as much or more due to interservice rivalry and the fight for shares of the nuclear weapons budget as it was based on a well-thought-out strategic rationale.”

The Arms Control Association, earlier this month, made a similar argument while arguing that the new president has long spoken of the dangers of nuclear weapons.

“Biden can start by directing his team to put on hold the Pentagon’s scheme to develop, test, and deploy beginning in 2029 a new fleet of 400 land-based, intercontinental ballistic missiles (ICBMs). If pursued, the new missile would cost in excess $264 billion over its anticipated 50-year life cycle,” Daryl G. Kimball wrote on the association’s website. “This GBSD program pause would deemphasize the role of ICBMs, allow for a serious evaluation of the option of extending the life of the existing force of 400 Minuteman III ICBMs at a lower cost, and provide for the pursuit of deep mutual reductions in the bloated U.S. and Russian nuclear arsenals.”

"There is no good reason to buy the GBSD and several good reasons not to,” Kaplan wrote. “This past year we’ve been immersed in an abyss that’s disturbing enough, not least because it’s been real, and so it may be a fine time to ask how many nuclear weapons we really need—and to make those who say we need to build more explain very clearly just why.”