Does the U.S. Need to Contain China in Africa? 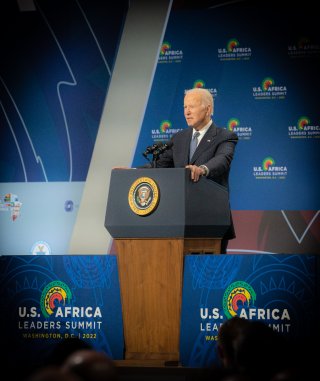 Last month’s U.S.-African Leaders Summit aimed to compete with China, Russia, Turkey, the United Arab Emirates (UAE), and other nations for “influence” in Africa, a continent that is growing in prominence. According to the New York Times, China, which recently gave a whopping $60 billion in aid and loans to African nations, is leading the race for influence on the rising continent, with the United States falling behind in the giveaways. Really, that’s just fine.

After World War II, during the Cold War, and 150 years after the Constitutional Convention, the United States deviated from its traditional foreign policy of being a reluctant and late participant in overseas wars. President Harry Truman, in choosing to help the autocratic governments of Turkey and Greece fend off Communist influence in 1947, pledged the United States to compete for influence in a global Cold War with the Soviet Union. In that forty-two-year Cold War, the United States spent huge amounts of blood and treasure reflexively competing all over the world to contain, and in a few cases roll back, Communism. This established a muscle memory for gaining ever more ethereal “influence” in far reaches of the planet. When the East Bloc and Soviet Union suddenly collapsed and the United States was perceived to have “won” the Cold War, such uncharacteristic American interventionism appeared to have validation. (In reality, the Soviet Empire collapsed because its creaking economy could no longer support its overextended empire. If the United States had not contested the then-basket cases of South Korea, Vietnam, Laos, and Cambodia and instead let the Soviets bear the cost of conquering and administering them, perhaps the Soviet Union would have collapsed faster than it did.)

Now that China is rising, U.S. media and foreign policy circles are wringing their hands about the United States losing out to China’s Belt and Road Initiative (BRI), which garners influence by state-driven lending to developing countries to build boondoggle infrastructure projects that they cannot afford, thereby accumulating dangerously high debt for their economies to bear. Africa has been one of the prime targets of the BRI influence project.

As China got involved on the continent, other actors, such as Russia, Japan, the European Union, Turkey, and the UAE, wanted to get in on the action as well. For example, Turkey and the UAE have built infrastructure projects on the continent, and the Russians and Emiratis have sold weapons to a number of African nations. Many nations are after Africa’s earth minerals for electric cars and see Africa’s expanding population—which will double by 2050 to account for 25 percent of the world’s population—as a huge market for their exports.

The Trump administration, with its chaotic self-interested foreign policy, didn’t join the party in Africa. But the Biden administration, with a president who well remembers the Cold War competition, wants to catch up with the rest of the herd. Biden held a U.S.-African Leaders Summit at the White House in December to distribute some goodies of his own. To start, Biden will join the wooing of African leaders by supporting the African Union’s representation at G-20 summits, in organizations such as the International Monetary Fund, and more. Also, Biden has pledged $55 billion in new spending for Africa, including initiatives on computer coding education, cybersecurity, and rare earth minerals, which will be mined to build electric vehicle batteries.

Giving African nations and organizations more representation in international forums is fine, but should the U.S. government join the crowd of nations by slathering more government largesse on the continent? American companies competing for a growing African market will help both Africa and the United States. In contrast, any U.S. government infrastructure or subsidy programs would likely be counterproductive for both sides, as the record of the BRI has already shown.

On the security side, the United States should let the Europeans do more to provide security on the continent if requested. More generally, the United States needs to emphasize African self-reliance in the security realm. The United States must finally accept the reality that the multipolar world is already here by pushing for the expansion of the UN Security Council, adding not only the African Union but also India, Japan, Germany, and Brazil as permanent members. Each of these great powers could manage exclusively their own sphere of influence in the world, as President Franklin D. Roosevelt originally envisioned in his “Four Policemen” vision for post-World War II security. The new permanent members of the Security Council could handle any boundary conflicts or trans-sphere issues—for example, climate change—that arose in their sphere.

Such a framework would allow U.S economic rejuvenation by permitting the United States to substantially cut security spending, thus retiring some of its monstrous $30 trillion in national debt and reducing U.S. imperial overextension caused by the economic burden of policing the entire world for other wealthy nations, which allows free-riders to divert resources toward attaining a competitive edge in commercial markets. The United States now only accounts for 13.6 percent of global GDP but a whopping 38 percent of the world’s defense spending, which has created a competitive drag on the U.S. economy that must be reduced. Washington can do so by refusing to serve as the unilateral global policeman or pursue a zero-sum competition with China for military, political, and economic dominance.