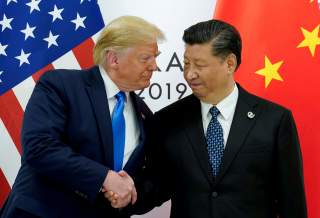 Hannah Arendt also supplies an excellent closer. Plato, she recalls, “discovered the very insecure position of truth in the world, for from ‘opinions comes persuasion and not from truth.’” Facts are sacrosanct for totalitarians only insofar as they advance the official narrative, molding opinion and thus persuading important audiences. Inconvenient facts can be discarded. Totalitarians resort to word games—or simply make things up—to skew opinion in their favor.

Chinese Communists have mastered this Platonic insight. They try to shape opinion through legal, media, and psychological warfare—their “three warfares”—on a 24/7/365 basis. And they sculpt the narrative with some success, even in the foreign press over which they have no control. In recent years, for instance, it has become commonplace in Western reportage to say something to the effect that that Beijing has “not renounced” the use of force against Taiwan. And indeed, the 2019 defense white paper declares, “We make no promise to renounce the use of force. . . .”

While true in a strict sense, though, the choice of that word renounce puts an innocuous and misleading gloss on Chinese policy. Not foreswearing an option carries different connotations from openly pledging to use that option. Press reports’ word choice makes it sound as though CCP leaders might renounce warlike means but just haven’t bothered. The wording makes war sound like an abstract possibility rather than a very real prospect. Not only has Beijing never disavowed the use of armed force against Taiwan. It has explicitly and repeatedly vowed that it will use force against the island under certain circumstances, and it saw fit to write that threat into law back in 2005 under the guise of its “Anti-Secession Law.”

So, by all means, quote the language about refusing to renounce war, etc., but give equal play to what comes afterward. The defense white paper pivots from refusing to promise to abjure force to “reserv[ing] the option of taking all necessary measures” against “separatists” on the island, or elsewhere around the Chinese periphery. Even that stops short of the language in the Anti-Secession Law, which proclaims that the Chinese state “shall employ non-peaceful means and other necessary measures” to thwart moves toward independence. That shall leave little ambiguity.

The masters of history and philosophy agree: caveat emptor. Afford the words of totalitarians extra scrutiny. Let’s refuse to let the Chinese Communists of the world use linguistic shenanigans to disguise their intentions. Make them communicate clearly. Make them defend the indefensible frankly, and we might yet shame them into humane conduct.