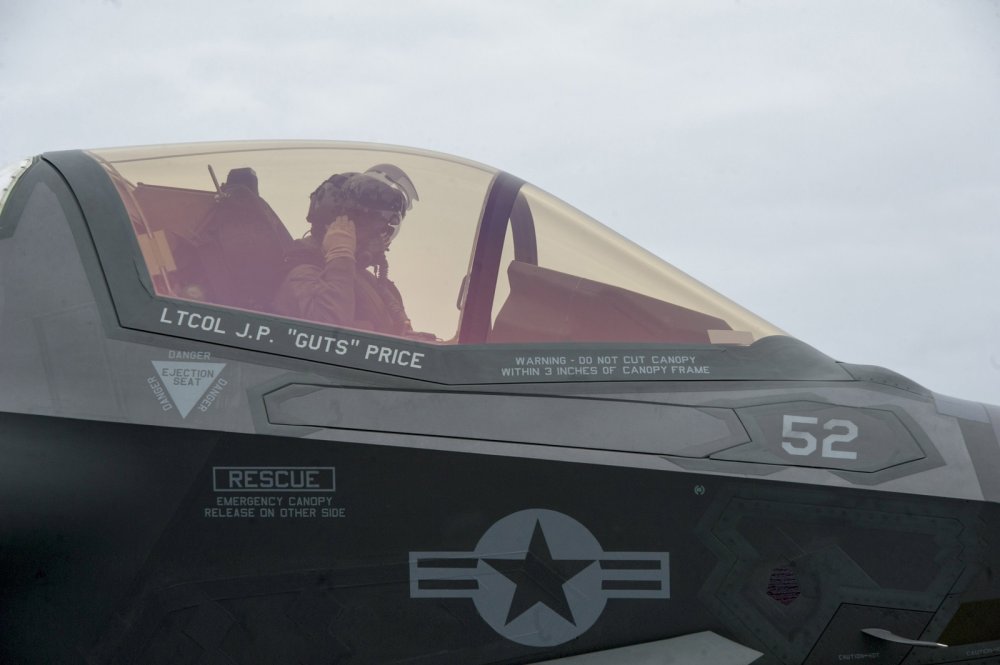 Four years after declaring initial operating capability with the new F-35B stealth fighter, the U.S. Marine Corps has acquired nearly 150 of the vertical-takeoff jets. The Corps hopes ultimately to buy more than 400 F-35Bs in order to replace nearly every tactical jet in the service’s inventory, including F/A-18s and Harrier jump jets.

Today Marine Corps F-35Bs operate from ships and air bases all over the world. But there’s one mission that the F-35s probably never will successfully undertake. They won’t fly from improvised, austere island airstrips in direct support of invading Marines, as Marine planes did during the Guadalcanal campaign in 1942.

“The logistical support burden for F-35Bs at an ‘austere’ base ashore is prohibitively onerous!” Chip Dudderar, a former U.S. Navy test pilot, explained in a 2013 essay.

The fuel, bombs, bullets, parts, tools, maintenance personnel and their personal and professional logistics load, the command-and-control capability ashore, the self-defense forces to protect all of these valuable assets in a by-definition hotly contested environment are just too much for the Marines or even a joint force to sustain for more than the first operational mission cycle — or as soon as the first airplane returns to this supposedly austere base for a mission turnaround.

The Marine Corps has never successfully demonstrated this ashore operational capability with the Harrier because it has always been too hard even in peacetime conditions. Supporting and sustaining the F-35B will be even harder —and impossible in the heat of battle.

The next amphibious battle likely will be easier than Guadalcanal or harder, Dudderar predicted.

“But definitely will not be the same. So let’s look at it both ways.”

“Easier” means that it will have less of the danger and urgency of Guadalcanal, where the Marines had to valiantly defend their foothold ashore while the Navy maneuvered away from the beachhead to defend the supporting fleet against an oncoming Japanese carrier force.

That worked wonderfully, even though the Marines today tend to overlook that strategic purpose, ignoring history and focusing instead on the hardships that they overcame ashore while this much larger U.S. strategy was playing out hundreds of miles away at sea.

Today we can expect, in a more permissive amphibious scenario, to have excellent support offshore from Navy resources as well as global support from the Air Force for close air support.

In fact, it is apparent that just the armed helos and Unmanned Aerial Vehicles of the USMC and Army may be quite capable of providing all of the close air support the Marines might need in a cooler situation. And then the Marines can use their precious organic vertical and short cargo lift — V-22s and C-130s — exclusively to support their troops rather than any unnecessary F-35B austere airfield capability.

And keep in mind that moving the F-35B detachment ashore entails more than just flying the airplanes. The F-35B detachment must also be linked and controlled with all other forces in the area. So it will require full command and control support to keep the air detachment informed and to direct their missions. This is just more stuff that has to be moved and defended ashore.

If the scenario is more intense and less permissive, the F-35B force ashore at its austere base will be under severe threat from enemy ground and air attack. That could cause more resources to be sucked away from the troops penetrating ashore in order to man static ground and air defenses for the F-35Bs.

If the conditions are that nasty, it is arguable whether the amphibious assault will even be appropriate until conditions are much more favorable and the beachhead considerably softened by bombardment.

In short, I doubt that today and in the foreseeable future we will ever resort to accept harsher-than-Guadalcanal tactical conditions for an offensive insertion. The likelihood of our doing this is so infinitely small that it alone would not support the F-35B procurement. The “Guadalcanal reasons” are just wrong today.

For the First Time Ever, the F-35B Takes-Off at Sea With Full Weapons Load and Drops Live-Bombs