Donald Trump Is All Tweet and No Action on Iran 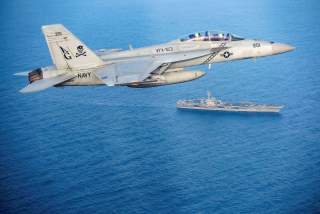 In all the furor over Donald Trump’s impending impeachment (let’s not kid ourselves), the whole Iranian attack on Saudi Arabia faded to the back pages. But remarkably, the Trump administration managed in the wake of that unprecedented attack on global energy supplies to reconstitute the almost-dead US-European consensus on Iran. The first victory was a joint British-French-German public accusation that Iran was indeed responsible for the attack earlier this month. Tehran and its fellow travelers have grown accustomed to European waffling on Iranian terrorism, but the language was blunt and clear: “There is no other plausible explanation” than that “Iran bears responsibility for this attack.”

But that accusation was far from the Trump administration’s best accomplishment. Less noted, but far weightier, the original EU-3 behind the Iran deal allowed that, “[t]he time has come for Iran to accept negotiation on a long-term framework for its nuclear programme as well as on issues related to regional security, including its missiles programme and other means of delivery.” Let’s underscore the key words here: “long-term framework for its nuclear programme.” Excuse me, Mssrs. Macron and Johnson, Mme. Merkel, I thought that the JCPOA was that “long-term programme.” You affirm your support for it, but know it’s not enough? You want more? Now? And you want to broaden negotiations to include “regional security, including […] missiles programme and other means of delivery”? Well, glory be. That is nothing short of amazing. Yes, that’s been the EU-3 position for a while, but they’ve heretofore been more preoccupied with sweet-talking Tehran than standing firm with Washington.

For those who might think those demands are the de minimis the civilized world might make of the brutal and dangerous Tehran regime, let me remind you that those demands were far from the lips of Barack Obama, John Kerry, and the whole Iran deal fraternity. Those omissions, among others, are the reason Donald Trump exited the Iran deal to widespread teeth-gnashing and renting of silk outerwear. And now the Europeans want to talk about terrorism and weapons delivery. Ladies and gentlemen, that is a victory for the Trump administration.

Over in the Gulf, the Saudis and the Emiratis have just about had it with Donald Trump, and it’s hard to blame them. The President has been all tweets and no action in the face of escalating Iranian attacks. The state of affairs is so bad, both Abu Dhabi and Riyadh are hedging away from the United States and playing footsie with China and Russia, and even… Iran. America’s nominal partners in the region have started to cotton on to the fact that notwithstanding those beautiful moments around the orb, Donald Trump has no intention of coming to their aid with anything more than a few troops, a desultory cyber-attack or two, and a whole lot of verbiage. In fact, they’re starting to believe he really does want to pull a Kim Jong Un with Ayatollah Khamenei, or at the very least, Iranian President Hassan Rouhani. But perhaps they can now harbor a hope — possibly not more — that the coalition that brought Iran to the table a few years ago has remembered who the bad guys are. And maybe, just maybe, the Iranians have finally persuaded them after the attack on Saudi that they need to do something about it. Here’s hoping.

This article by Danielle Pletka originally appeared at the American Enterprise Institute.