Donald Trump and Barack Obama Actually Have Something in Common 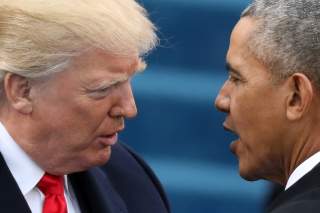 Barack Obama was, as president, eloquent. His language was sophisticated. He spoke in measured tones and advanced informed, reasoned dialogue.

Donald Trump is inarticulate and brusque. His language is simplistic. He dishes out invective. He shows so little regard for the facts that some say he’s the exemplar of a “bullshit artist.” And he promotes a dialogue of the deaf.

The differences between Trump’s and Obama’s rhetorical styles seem stark. Yet, when we set aside the presidents’ speaking styles and looked more carefully at the specific words Trump employed in his first months in office, we were surprised to discover that, in certain ways, these two presidents are remarkably like each other and unlike their predecessors. Here’s what we found – and why Obama and Trump have more in common than you would think.

How we did our research

Our analysis is based on Trump’s more substantial speeches – which we somewhat arbitrarily define as those longer than 500 words – which were directed primarily at domestic audiences. We scraped from the website of the American Presidency Project all of Trump’s campaign speeches and presidential addresses through July 1 that met these criteria. We ended up with 74 campaign speeches, representing more than 230,000 words, and 56 presidential addresses, which included more than 122,000 words. We compared these bodies of speech to each other and to a separate database of postwar presidential speech that one of us had collected, using these same criteria, for a recently published book.

We ran these speeches through a specialized computerized content analysis program called Diction. Diction contains 33 separate dictionaries tailored to political speech. It searches texts for the words contained in the designated dictionaries and then calculates the number of words from each dictionary that would be present in a typical 500-word sample.

Obama and Trump vs. everyone else

On two key dimensions, Obama and Trump look similar – and stand in marked contrast to all other presidents.

Second, both Trump and Obama rank very high on measures of “tenacity.” This dictionary includes a series of words such as “must” and “need” that call for action and that “connote confidence and totality.” Obama’s rhetoric is around 45 percent more tenacious than the presidential average. Trump’s rhetoric is a bit more tenacious than even Obama’s. They are the only two presidents who substantially exceed the average.

Obama and Trump’s rhetoric suggests that the prime mover of government is not separation of powers, political parties or the bureaucracy – but the will of the president. Its self-referentialism projects an image of strong leadership and of the president as the central pivot of action. Its tenacity expresses confidence that the president will triumph over the many obstacles in his way.

For all their differences, both Obama and Trump consistently presented themselves as the solution to the nation’s problems. Accepting the nomination at the Republican National Convention, Trump assured Americans, “Nobody knows the system better than me, which is why I alone can fix it.” He regularly cited his own biography as the reason that Americans should “trust” him. The irony is that the predecessor who, on this dimension, most resembles Trump is the very one whom Trump cast as an utter failure and weak leader and as his chief foil. Obama too regularly invoked his unique personal story as the reason that Americans should place their faith in him. Minus Trump’s boastfulness, Obama too portrayed himself as the key agent of national transformation: “I’m the one who brings change. It is my vision. It is my agenda,” he told The Washington Post in January 2009. He saw other government officials as just “good mechanics.”

Yearning for a strong leader

The computerized content analysis of presidential rhetoric sets out a pattern, it does not explain it. However, we believe it likely that Obama and Trump adopted the same rhetorical tack for the same reason: Audiences across the political spectrum have craved a strong leader who will overcome Washington’s paralysis and address the nation’s challenges.

Especially since 9/11, American politics has grown more partisan and polarized, even as Americans’ values have converged. That partisan divide has produced gridlock in the halls of power, and Congress has become a site of minority party obstruction. As a result, Americans have become frustrated with Congress, and their trust in government has plummeted. They have increasingly looked to the president to seize the initiative, conquer Washington’s dysfunction and persuade Congress to act.

In 2007, “honesty” mattered most to Americans in selecting the nation’s next president, with “leadership/strength” a distant second. In 2012, American voters said that “shares my values” was their top consideration in electing a president. By 2016, having a president who was a “strong leader” had easily taken the top spot, across voters of all parties, and was twice as important to them as it had been four years before.

Obama and Trump’s self-referential and tenacious rhetoric – one might even call it authoritarian – seems designed to satisfy that demand for strong leadership centered in the presidency. It is not accidental that their rhetoric, as the linked charts show, also reflects a continued, long-term decline in “cooperative” and “accomplishment” language, as collaboration across party lines has been rare and as there have been few achievements. Ironically, “satisfaction” rhetoric has experienced a corresponding rise – perhaps because there has been less to celebrate and therefore more reason for presidents to proclaim that all is well.

Of course, some of this may be Donald Trump’s inimitable rhetorical style. The figures above reveal that Trump the candidate was somewhat less self-referential and less tenacious than Trump the president has been. Perhaps he was simply restraining himself during the campaign. Once ensconced in the White House, he could become more himself. Trump the president may be Trump unleashed.

Nevertheless, we’d better get used to authoritarian rhetoric. It appears to be here to stay.