Donald Trump Could Learn Something From These Five Movies 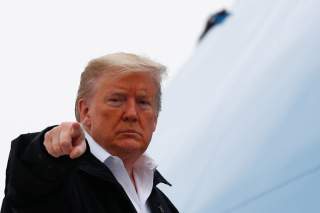 Strange to say, but Donald Trump might have been a filmmaker rather than real estate magnate. As he informs us in The Art of the Deal, his book of autobiographical recollection and business advice, he “flirted briefly with the idea of attending film school at the University of Southern California”.

Hotels, apartment blocks and casinos, rather than movie lots, ultimately became the favoured spaces for demonstration of Trumpian creativity. But he has remained a keen fan of cinema, and in 2012 identified his five favourite films for Movieline: Citizen Kane (1941), The Good, the Bad and the Ugly (1966), Gone with the Wind (1939), GoodFellas (1990) and The Godfather (1972).

What do these films tell us about the Trump worldview? Each offers a spectacle of male potency, often in peril but persisting in the face of opposition, whether this is exerted by women or by forces of law and order. These movies can be understood as offering Trump support, in celluloid form, for a philosophy Oliver Jones calls social Darwinist: “He views the world as an irrational jungle where the most successful people are tough, masculine and neurotic.”

But what would a canon of anti-Trump cinema look like? Where might we find films that challenge his expressed values or the policies ? Here, countering his Movieline choices, are five movies that Trump might learn something from.

While Trump’s campaign pitch presents the businessman in America as heroic visionary, Paul Thomas Anderson’s film unveils him instead as a sociopath. The pursuit of oil in California by Daniel Plainview (Daniel Day-Lewis) crushes bodies and destroys family bonds; at the end, guilty of murder, he hunches alone and defeated in his version of Trump Tower.

The film offers subversive insights, also, into how an entrepreneur fashions a winning persona: the ruthless Plainview addresses those whose land he would possess in folksy and god-fearing rhetoric, practising public relations techniques that will be perfected in our advanced media age. Were Trump to appreciate satire (not his favourite genre, one suspects), he might learn something here.

In this harrowing Romanian film directed by Cristian Mungiu, a student, assisted by a female friend, desperately seeks an illegal abortion. Trump’s thinking on abortion has proved adjustable for different constituencies, shifting latterly from pro-choice to pro-life. But Mungiu graphically shows the effects of curtailing women’s rights in the exploited bodies and damaged psychologies of his two protagonists.

Here too, in the film’s emphasis on social constraints, is an antidote to Trumpian optimism. The power of positive thinking, imbibed by Trump as a young New Yorker from clergyman and self-help author Norman Vincent Peale, can achieve nothing in the world of this film.

The Three Burials of Melquiades Estrada (2005)

In his 2015 book Crippled America: How to Make America Great Again, Trump reiterates his sense of the nation as citadel: “Nobody can build a wall like me. I will build a great wall on our southern border.” Tommy Lee Jones’s blackly comic neo-Western finds holes and crossings in the US/Mexico frontier, rather than sealing off each nation from the other. Illegal migration here is also southward rather than exclusively northbound, as an American border guard who begins in a state of Trumpian paranoia heads into Mexico looking for redemption.

Included in this film’s montage of ecological casualties are the casinos of Las Vegas, now buried in sand. Not Trump’s own Vegas skyscraper, admittedly, but still worryingly close to home. (Or perhaps, to Trump, not so worryingly, given this political campaigner’s scepticism towards climate change – the short chapter on the subject in Crippled America is subtitled “A Lot of Hot Air”.) Mixing apocalyptic sci-fi imagery with testimonies by globally dispersed witnesses, Franny Armstrong’s film aims instead to produce environmentally activist viewers.

Bob Roberts is running here not for president, but for a senator’s seat in Pennsylvania. The similarities with Trump are nevertheless uncanny: each has been educated in military academy and business school, each is a highly successful entrepreneur, and each galvanises audiences by summoning up visions of US decline. While more scatter-gun than focused in its political satire, the film’s account of Roberts’s unlikely success displays a sense of panic familiar to American progressives in our present moment. Tellingly, its last word, after the credits, is “VOTE”.

There is, however, no guarantee that a Trumpian reading even of these five films would be progressive. Trump revealed a capacity for inventive movie interpretation – deflecting rather than absorbing challenges to his worldview – in remarks he made about Citizen Kane for the US film director Errol Morris in 2002. He chooses not to see the film as a disturbing portrait of the authoritarian personality or of the businessman as dangerous populist (the favoured view of critics). Instead, asked by Morris what advice he would give Charles Foster Kane, Trump dwells only on Kane’s two troubled marriages and replies: “Get yourself a different woman.”

Once again, then, the subject of Trump’s ideal cinema is revealed as the aspirational American male, ever mindful of threats to his potency.