Is Donald Trump Cutting Medicaid or Not? 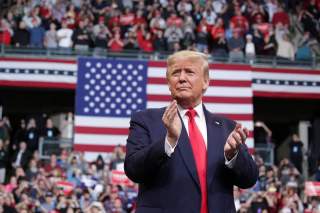 This afternoon the Trump administration released its proposed budget for fiscal year 2021. It includes $4.8 trillion in federal spending, and politically balances itself as an election-year proposal. It has little likelihood of passing the Democratic majority in the House of Representatives without major changes.

During his 2016 presidential campaign, Donald Trump promised that as president he would not cut social programs like Medicare or Social Security. For years, congressional Republicans, among them future Speaker of the House Paul Ryan, made the case that significant entitlement reform was necessary to keep the programs solvent. Trump’s campaign proved that there was a disparity between conservative think tanks proposing the reforms, and conservative voters who were fearful of the government fiddling with their entitlements.

There are contradicting standpoints on the budget regarding whether or not Trump is adhering to that campaign promise. According to Act Director of the Office of Management and Budget Russ Vought, the budget does not include funding cuts to “Social Security and Medicare for seniors.” The Washington Post reports, however, that there are planned cuts to Medicaid and the Children’s Health Insurance Program.

Vought counters that “reducing the cost of healthcare is not a cut.”

The budget calls for major cuts to cabinet departments. Since Ronald Reagan was elected in 1980 with the promise to eliminate the Department of Education, it has been an expected part of Republican politics to promote the repeal of extraneous federal departments. Some listed in the past include Education, Housing and Urban Development, Health and Human Services, and Commerce. No Republican administration has of yet eliminated a federal department.

Trump’s budget does call for cuts in HHS to the tune of 9%. Other departments receive the same (and worse) treatment. This includes the Department of Education (an 8% budget cut), the Department of the Interior (a 13.4% cut), and the Department of Housing and Urban Development by 15.2%. The State Department, combined with the U.S. Agency for International Development, would have their funds cut back a full 22%.

The largest cut is to the Environmental Protection Agency, which the Trump administration wants to cut by 26.5%.

Not every federal department or agency is receiving a cut. The Department of Homeland Security, which handles immigration, is receiving more money, and the National Aeronautics and Space Administration is supposed to receive a 12% budget increase. President Trump has said he’s interested in space exploration to Mars.

Despite the cuts, the White House’s proposal stands as one of the larger budgets of the past decade. The Republican plan is to extinguish the current deficit by 2035. This fifteen year plan violates previous Republican promises to end the deficit in a decade or less.