Donald Trump Got Completely Suckered By Iran In Iraq 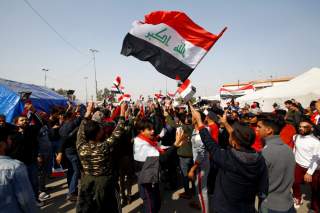 Key point: Tehran did not waste much time responding to the American strike.

On December 29, 2019, in retaliation for a rocket attack two days earlier by the Tehran-backed Kataib Hezbollah (KH) militia on the K-1 military base near Kirkuk that killed an American contractor, Air Force F-15E fighters struck three of the militia’s bases in Iraq and two more in Syria. The attacks left about twenty-five militiamen dead and more than fifty wounded. The targets were KH storage facilities and command posts; Washington asserted that the command posts had masterminded a series of eleven rocket attacks that had culminated with the December 27 KH strike on the K-1 base.

Trump responded by issuing what he called “not a warning but a threat” that Tehran would be held accountable—and presumably be the target of American military retaliation—if American property were damaged or its citizens harmed. Tehran’s response was to encourage a second day of rioting. When Washington deployed the 82nd airborne rapid response unit even as Marines were tear-gassing the rioters inside the embassy, the demonstrations abated, at least for the moment.

Iraqi military units did not intervene throughout the two days of riots. Though some officers evinced concern for the safety of the American diplomats, it was clear that the Iraqi government simply was unwilling, or fearful, of confronting Tehran’s minions head-on. It was the most graphic evidence of what has long been recognized throughout the region, if not in Washington: It is Iran, not America, that calls the shots in Baghdad.

The man behind Tehran’s strategy in Iraq, as he has been in Syria, is almost surely Major General Qasem Soleimani, commander of Iran’s Quds force, Tehran’s shock troops. Soleimani has had free reign in Iraq for some time. It is likely that the leaders of the Iranian-dominated militias, the Hashd al Shabi (Popular Mobilization Units)—of which the KH is a component force—answer to him. He surely wants Trump to respond with more than threats, or even tear gas.

On its face, it would seem that Soleimani and the Mullahs of Iran are pursuing a policy that is counterproductive. If their objective is to drive the United States out of Iraq, and ultimately out of the Middle East, it certainly seems that their support for attacks on American facilities, and for the storming of Washington’s Baghdad Embassy, so reminiscent of the Hostage Crisis of 1979,  would likely to have the opposite effect. After all, Donald Trump has made it clear that he is determined not to allow another “Libya” on his watch. He might actually carry out his “threats” in response to any further efforts to sack the embassy, or worse still, to seize or injure American diplomats and other American personnel. At some point, he might order American troops to fire on the rioters, among whom may well be Iranian fighters, the equivalent of Russia’s “little green men.” He could do no less without being seen as a “loser,” the appellation he most abhors, indeed fears.

Were American troops to fire on Iranians, however, the Ayatollahs could treat any such incidents as an opportunity to rally the highly nationalistic Iranian public and order Tehran’s proxies, or even Soleimani’s Quds Force, openly to attack American facilities throughout Iraq. Soleimani may be betting that given the American public’s disenchantment with Washington’s “endless” Middle East conflicts, Trump, despite his threats, would be reluctant to retaliate by unleashing the full might of American power to eliminate Iran’s presence in Iraq. Any such effort could once again mire American forces in a prolonged Middle Eastern conflict, which, more than anything else, could damage Trump’s hopes of re-election.

The president might resent being a “loser” in Iraq, but that image would pale before the prospect of his losing America’s presidential election. If saving his electoral fortunes calls for his leaving Iraq to Iran’s tender mercies, Trump will not hesitate to do so. After all, he could summon up the spirit of Ronald Reagan, and like his far more illustrious predecessor, call it nothing more than a “strategic redeployment.”