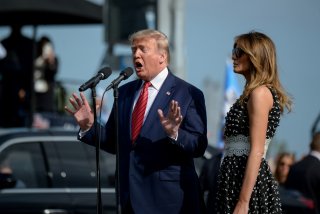 Editor’s Note: As the world commemorates the seventieth anniversary of the start of the Korean War, the Center for the National Interest’s Korean Studies team decided to ask dozens of the world’s top experts a simple question: Do you believe that the Korean War will finally come to an end before its next major anniversary in 2025? The below piece is an answer to that question. Please click here to see even more perspectives on this important topic.

Prediction is a dangerous business at the best of times. In the context of inter-Korean relations, this is especially true. Notwithstanding the high hopes of 2018 when no fewer than three historical summit meetings—in Panmunjom, Singapore, and Pyongyang—heralded to many the prospect of a genuine peace regime on the Korean peninsula, developments this June have extinguished, for now at least, earlier optimistic assumptions of lasting inter-Korean reconciliation. The North’s decision to blow up the joint liaison mission in Kaesong and the ratcheting up of its vituperative rhetoric against its “enemy” neighbor to the South suggest that genuine, lasting peace is increasingly elusive and that the risk of conflict is increasing, not diminishing.

June has been a time of surprises and the intensification of peninsular tensions in the past. Some seventy years ago, Kim Il-sung’s June 25 lightning military attack across the DMZ came perilously close to defeating the government of Syngman Rhee in the South and forced South Korean and U.S. forces into the narrow Pusan enclave at the foot of the peninsula. Only a U.S.-led United Nations “police action” to resist aggression and the tactical brilliance of General MacArthur’s September 1950 landing of U.S. forces at Incheon helped to turn the tide of battle, contributing eventually (after many months of fluctuating battle lines and reversals on both sides) to a military stalemate and the armistice that still determines the standoff between the two Koreas.

North Korea today is not about to invade the South. The threats of military force from Kim Yo-jong, the sister of Kim Jong-un, or the warning from Ri Son-gwon, the North’s foreign minister, that it will end any prospect of future talks with the United States unless it “receives something substantial” from the United States are, most likely, intended to put pressure on President Moon Jae-in in the South to find a way of relaxing economic sanctions against the North by lobbying President Donald Trump to re-engage with the North and offer significant concessions to break the deadlock that has persisted since the failure of the Hanoi summit in February 2019.

The problem for the North is that Trump is not listening. With his poll numbers plummeting because of his inability to respond coherently to the coronavirus crisis and the Black Lives Matter movement, the president is suffering from an acute case of Alliance Attention Deficit Syndrome, reluctant to risk his dwindling political capital by engaging seriously on Korean matters and more inclined to punish Seoul for failing to accede meekly to the United States’ brutal demand for a four-fold increase in South Korean Host-Nation Support for U.S. forces.

Particularly troubling is Trump’s apparent eagerness to channel his inner Neville Chamberlain. Speaking at a West Point commencement ceremony just a few weeks ago, the President in a startling statement noted, "It is not the duty of U.S. troops to solve ancient conflicts in faraway lands that many people have never heard of." It is unclear which conflicts Trump has in mind, but the danger of this isolationist message is that it weakens alliance deterrence and sends a worrying signal that the United States is giving up on its overseas commitments.

Seventy years ago, then-Secretary of State Dean Acheson sent a similarly destabilizing message in his January 1950 National Press Club speech which inadvertently gave Pyongyang a “green light” to act with impunity by suggesting that the “defensive perimeter” of U.S. commitments in East Asia did not include Korea. The risk today is that a North which feels ignored and not taken seriously will be minded to increase pressure on the South until it gets the attention it craves. This could take the form of maritime provocations near the disputed Northern Limit Line in the West Sea, the re-construction of guard posts in the DMZ, sporadic artillery shelling, more missile launches or (less plausibly) a seventh nuclear test. If Pyongyang’s impatience persists and it misperceives the U.S. as unresponsive, it may be tempted to provoke in a manner that could rapidly escalate the conflict, with all the associated risks given the North’s de facto nuclear status.

History reminds us of the importance of taking your adversary seriously and the dangers of inconsistent signaling and misperception. To have a hope of recovering the momentum for peace in the face of the North’s petulant brinkmanship, the United States and South Korea will need publicly to reinforce their alliance resolve and deterrence capabilities and commit to responding proportionately but carefully to any direct provocations from the North while also considering partial concessions that might incentivize Kim Jong-un to back away from further fruitless disruption.

Dr. John Nilsson-Wright is concurrently Korea Foundation Korea Fellow and Senior Fellow for Northeast Asia at Chatham House; he is also Senior Lecturer in Japanese Politics and International Relations at the University of Cambridge and an Official Fellow at Darwin College, Cambridge. You can follow him on Twitter @JnilssonWright.