Donald Trump Just Granted 5 Full Pardons. Check Out to Who. 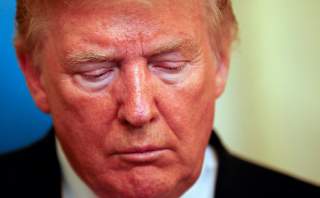 The president decided each man was worthy of Executive Grants of Clemency after “a careful review of the files” of each individual, according to an official statement from the Office of the Press Secretary.

Bubala pled guilty to improper use of Federal Government in 1990 in an effort to transport automotive equipment from one town to another. Today, he volunteers at a Veterans Affairs Medical Center by teaching classes on the American Flag, and is serving on an honor detail for veteran funerals.

McKeever was arrested in 1989 when he was 19 years old for transporting marijuana from Mexico to Oklahoma and immediately pleaded guilty to one count of using a telephone to facilitate the distribution of a controlled substance. He has spent the last 29 years doing charity work for his community and is an active member of the Sheriffs’ Association of Texas.

Takumi was arrested in 1987 at an illegal gambling parlor during a law-enforcement raid and pleaded no contest. After his arrest, he worked as a tax preparer for several years and now owns a tax preparation franchise within the Navajo Nation.

Tedesco was convicted of drug trafficking and fraud in 1990, due to his minor involvement in a drug-related crime and immediately pleaded guilty. Former President Barack Obama pardoned Tedesco in 2017, but his fraud conviction was not included in Obama’s grant of Executive Clemency because of a clerical error, according to the release. Trump will overturn the error.

Williams participated in and was convicted of a number of crimes related to the theft and sale of firearms his friend stole from someone’s luggage at the airport where he worked as a baggage handler. His supervised release after spending four months in prison was cut by one year due to impeccable behavior.  Williams is an active member of his community, whom some have described as having an exceptional character.

The full pardons restore federal rights to the men, including the rights to vote and bear arms.

“Today, they are, once again, full and equal citizens under the law,” the statement reads.

The president has granted executive clemency to 16 people, including Bubala, McKeever, Takumi, Tedesco and Williams.