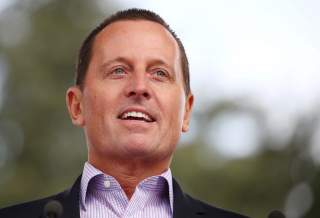 President Donald Trump announced that he will make Richard Grenell the acting Director of National Intelligence (DNI), which is supposed to coordinate intelligence across America’s vast, $50 billion-per-year intelligence bureaucracy. The position was created in the years after the 9/11 attacks on the United States, which demonstrated a fundamental lapse in collating intelligence.

Grenell is currently the U.S. ambassador to Germany, and will continue in that role. He previously spent eight years at the U.S. mission to the United Nations during the intense diplomatic maneuvers there that coincided with the George W. Bush administration.

Defenders of the failed status quo that is our intelligence bureaucracy immediately criticized Trump’s choice, as did the top Democrat on the Senate Intelligence Committee. In decrying the appointment, Senator Mark Warner (D-Va.) vowed ominously, “the work of our intelligence professionals is never interfered with or manipulated for political ends.”

But that just isn’t so. Some of our intelligence bureaucracies have become hopelessly politicized and ineffective.

For example, the false claim that the Trump campaign colluded with Russia, which was debunked by the Mueller report, was instigated by Obama-era intelligence pooh-bahs on their way out, especially former DNI James Clapper and CIA director John Brennan. Both are now highly-paid political commentators on left-leaning cable networks.

Also during the Obama administration, officials manipulated intelligence to paint an overly optimistic view of the fight against ISIS, which was failing at the time.

Obama officials also phonied up intelligence to mislead the public and Congress about the attack on our diplomatic outpost in Libya that killed the U.S. ambassador.

During the Bush administration, the DNI produced and leaked an assessment that claimed falsely that Iran had ended its nuclear weapons program. The underlying intelligence in the report said the opposite, but was classified. The false leaked version, designed by DNI bureaucrats successfully to tie President Bush’s hands-on Iran policy, was unclassified.

Continuing the tradition of political warfare against our own democracy, intelligence bureaucrats reportedly told House Democrats recently that Russia will interfere in the 2020 elections and try to help Trump win. The second claim is dubious, since Moscow would probably prefer a president who hasn’t strengthened its opponents as much as Trump. The first claim is obvious, since Russia always tries to interfere in U.S. elections, mainly to cause discord and chaos, which Democrats have mightily abetted since Trump was elected.

Regardless, this is junk, not intelligence.

At best it is the work of bureaucrats covering their posteriors to say they didn’t miss an obvious foreign development. At worst, they are trying to undermine the president by attempting to revive the phony insinuation of collusion with Russia, which seems more likely since it was furnished to House Democrats.

Clearly, despite Senator Warner’s admonition against politicizing intelligence, deep state bureaucrats long ago did just that. What really concerns Warner and the rest of the foreign policy establishment is that this nefarious activity will stop, not begin.

They know that Grenell will not smile upon bureaucrats playing politician on the taxpayers’ dime. As ambassador to Germany, Grenell has established a new model for diplomacy. Instead of attending social events and limiting public utterances to sweet nothings about Germany and the rest of Europe, Grenell has been blunt and direct. He has unabashedly echoed concerns held by Trump and Congress about Germany not meeting its own promise to spend more on its defense, its willingness to make Europe dependent on energy imports from Russia, and its attempts to undermine U.S. sanctions on Iran.

This toughness wasn’t just good for the United States, it was also good for Germany. Leaders and voters in that country need to know that drifting away from the United States and breaking its promises to us will have consequences. That’s real diplomacy.

Grenell will bring this no-nonsense approach to DNI. Even in a short tenure before a permanent replacement is presented to the Senate for confirmation, which now takes many months, Grenell can trim a bureaucracy that has become bloated and seems more adept at politics than clarifying intelligence for the president and key Cabinet officers.

Some Democrats also dislike Grenell because he is a gay conservative. Indeed, Grenell’s appointment makes Trump the first president to appoint an openly gay Cabinet-level officer.

Even though they never deliver, Democrats take gay votes and dollars for granted. Grenell’s appointment highlights the inconvenient fact that Trump has done more for gays than any president. As a candidate, he waved a rainbow flag from a stage and effectively ended the GOP’s hostility to gays by shifting the culture wars. As president, he has appointed gays to senior positions and treats them the same as anyone.

There’s a lot to like about the appointment of Grenell. The cries of his opponents are one of them.