Donald Trump Messed Up America's Coronavirus Response (Will He Pay In 2020?) 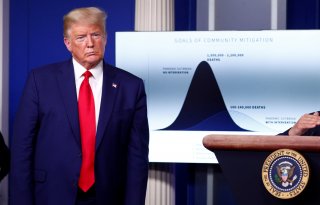 Key point: If the American people suffer as badly or worse than the Chinese, Italians, or Iranians, then they will be forgiven for wanting someone to blame for their hardships

Thomas Wright of the Brookings Institution has made a bold prediction: that if the coronavirus pandemic continues to worsen in the United States, President Trump will not survive long enough to face the electorate in November. Such a suggestion would have sounded fanciful just weeks ago. But given the administration’s sputtering response to what is now a veritable public health crisis, it is at least worth considering that Trump could be convinced – or forced – to avoid seeking a second term.

Everything depends upon how things unfold in the coming weeks and months. Will the rate of infections start to decline, or is the United States just weeks away from hospitals overflowing with coronavirus victims? Can the administration stave off a major recession, or should Americans be bracing themselves for job losses, shuttered businesses, and vanishing investments? If he can turn around his administration’s handling of the pandemic, Trump might yet emerge from this catastrophe with his image enhanced. So far, however, the prospects are looking bleak.

The framers of the Constitution designed the American presidency so that incumbents could be energetic when responding to national emergencies. While they did not want to endow the Executive Branch with untrammeled authority, they were eager to create an institution that would be empowered to mobilize the federal government in times of crisis. When the United States is put under strain, it is the President who is supposed to organize relief efforts, plot the pathway to recovery, and calm peoples’ fears. At its best, the presidency is an office above politics.

It would be a gross understatement to say that Trump has neglected to use the vast powers of the presidency to mount a successful response to the coronavirus pandemic. First, there were failures to prepare – such as the disbandment of the National Security Council’s directorate for dealing with global health security, as well as cuts to a host of related offices and programs. Second, there have been monumental failures to react with a sense of urgency. From bungling the development and distribution of coronavirus test kits to using his bully pulpit to spread misinformation, the President has simply failed in his duty to galvanize an effective national effort.

Of course, any president would have found it difficult to combat the spread of the coronavirus. But not all leaders would have chosen to lie about the availability of test kits in the United States, downplay the severity of the illness, offer irresponsible advice about how sick people might be able to carry on with their normal routines, or use Twitter to criticize political opponents just hours after reading a pre-prepared speech from the Oval Office that called for national unity. These mistakes were quintessentially Trumpian – and they have contributed massively to the sense of panic and confusion that now permeates American society.

Jim Antle is right: Trump’s missteps could easily cost him re-election in November. Given that the President’s approval rating has hovered at around 40 percent for the past three years, even a marginal dip in support – if sustained – would render his chances of winning the Electoral College almost non-existent. Up until now, members of Trump’s base have been reluctant to abandon their standard-bearer. But they will have ample cause to reconsider their position if the United States begins to look like a national disaster zone.

This is not entirely unrealistic. Already, dozens of lives have been lost. The financial markets are in disarray. Workers are being laid off. Major sporting events have been cancelled. Schools and daycares are closed. The nation’s first no-go “containment zone” has been established. Images of bare shelves abound on social media. In short, ordinary life has been upended – even if only temporarily. Then there are the dire predictions that the U.S. healthcare system is adequate for coping with the anticipated influx of new patients, raising the specter of hospitals overwhelmed with patients who cannot be treated.

And this is just the situation to date. If things continue to deteriorate along the lines witnessed in other countries – like China or Italy, for example, where tens of millions of people have been ordered to isolate themselves – then it is inevitable that even some Republicans will pin the blame on the President, no matter how aggressively Trump tries to avoid taking responsibility.

In such a worst-case scenario, it is eminently possible to imagine a dispirited Kellyanne Conway walking into the Oval Office with news of Trump stubbornly languishing at around 35 percent in the polls – an approval rating that would suggest an electoral defeat in November on par with those suffered by Walter Mondale in 1984, Jimmy Carter in 1980, George McGovern in 1972, or Barry Goldwater in 1964.

What would happen if it became clear that Trump was destined to lose in November? Would there still be time to remove him the Republican ticket?

The answer is yes, although none of the mechanisms for replacing Trump as the Republican Party’s nominee would be easy to implement. By far the cleanest option would be for the President to voluntarily step aside, as Lyndon Johnson did 52 years ago this month. While this might seem far-fetched, it could end up being the most attractive option for Trump if he becomes convinced that he is cruising to a humiliating landslide defeat.

Still, it would be uncharacteristic of Trump to go down without a fight. If he refuses to withdraw from the ticket, it will fall to the Republican Party to “encourage” him to stand down. This would only happen, of course, if it became incontestable that the President was driving the party over an electoral cliff edge, with staggering losses being projected for both the House and Senate. Only in such wretched circumstances would self-interested GOP grandees put aside their instinctive resistance to regicide and fight Trump’s inner circle to regain control of their party.

The messiest scenarios would arise if Trump was intent on clinging to his candidacy even in the face of a Republican Party revolt. If this happened, any attempt to remove Trump from the GOP ticket would most likely have to wait until after the party’s convention in August. This is because the primary process is already too far gone to prevent the President from amassing a majority of pledged delegates; if Trump wants the nomination, there is probably nothing that can be done to stop it being conferred upon him.

The party’s only recourse would be to interpret the existing rules of the Republican National Committee to allow for the forced ouster of an incumbent nominee after the convention had taken place, or else rewrite the rulebook to make such a thing explicitly permissible. This is assuming, of course, that the Republicans would decline to exercise the two constitutional mechanisms that exist for defenestrating a sitting president – namely, the 25th Amendment and the impeachment clause.

To be sure, all of the above are outlandish sequences of events. It is hard to imagine them taking place any time soon. Yet they are not much more fantastical that what the coronavirus pandemic has already brought about worldwide – including, it should not be forgotten, the national quarantine of entire countries. The point is that the spread of the coronavirus has shown itself capable of wreaking enormous havoc upon nations’ social, political, and economic fabrics. It would be a mistake to believe that the United States is exceptional in this regard.

If the American people suffer as badly or worse than the Chinese, Italians, or Iranians, then they will be forgiven for wanting someone to blame for their hardships. That someone might just end up being their president, Donald Trump, with one consequence being that Trump is denied even the opportunity to remain in office beyond his current term. Stranger things have happened.