Donald Trump Needs to Fix Medicaid—Here's How It Can Happen 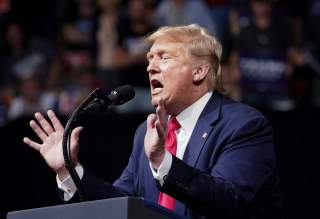 Medicaid—the welfare program that provides health care to vulnerable, low-income individuals and families —needs to be reformed, and soon. It’s consuming an ever-larger share of spending at the federal and state level and squeezing out other public policy priorities.

At the same time, many of the rules governing Medicaid limit the ability to design and manage the program in ways that reflect the diversity of those who are on it.

That’s one reason why the Trump administration released its Healthy Adult Opportunity waiver to offer states a simplified process to experiment with the design and financing of their Medicaid programs.

Opponents claim this waiver will undermine Medicaid, but they’re exaggerating its scope and impact. In fact, the Trump administration should do more.

This new waiver has three components:

1. Scope. The waiver applies only to a small subset of the Medicaid population—adult, able-bodied enrollees in states that have expanded eligibility beyond the federal minimum requirements. Most enrollees who fit these criteria are in those states that have adopted the Obamacare Medicaid expansion.

To put that scope into context, of the roughly 72 million people on Medicaid, about 12 million people are enrolled in the program because of the states’ decision to expand coverage under Obamacare.

Under an aggregate allotment, states would receive a fixed amount of federal funding for the targeted population. A state selecting this option would also be eligible to reinvest any savings that might accrue and reinvest those dollars back into the program. Under a per capita allotment, states would receive a fixed per person allotment from the federal government that would accommodate changes in enrollment.

3. Flexibility. In exchange for adopting these new financing arrangements, states would have at their disposal a range of programmatic policy changes, many of which have been approved under previous administrations.

States, for example, would be able to redesign the benefit package in ways that are more in line with commercial insurance, including updating enrollment and eligible standards and processes, integrating premium and cost-sharing, and streamlining new delivery and care models, such as premium support.

However, while offering relief for some, the waiver also brings with it some unintended consequences.

States, like Oklahoma, that want to help those in need but face outside pressure to expand Obamacare might see the waiver as a less controversial way to expand. Nevertheless, such a decision remains shortsighted and ill-advised.

Finally, equally as troublesome, the waiver locks out those states that have declined the Obamacare expansion. Under this waiver, those states would receive no help.

The narrow application provides no new relief or flexibility for states that are trying to manage their existing program.

The real impact will be determined by what happens next. To minimize the unintended consequences of this waiver, the administration should quickly pivot to accelerate efforts to provide states with additional outlets for reform.

Tennessee, for example, has submitted a waiver for consideration that proposes seeking to leverage similar programmatic reforms and explore new financing arrangements for its existing Medicaid program.

Beyond Medicaid, Georgia seeks to expand access to new coverage arrangements for its subsidized populations. Recent reports indicate there may be work still to be done to get administration approval.

This should not be a deterrent. Instead, the Trump administration should push forward with its the State Relief and Empowerment waivers, which provide states with new and innovative ways to lower costs and improve access in their insurance markets.

The new Medicaid waiver gives some states the flexibility and resources needed to better manage and tailor the way care is delivered in their Medicaid program.

But the administration should move aggressively to work with other states to open up new opportunities to bring down cost and improve the quality for care, and re-engage Congress on a permanent solution to move dollars and decisions back to the states and to patients.

As a senior fellow in health policy, Nina Owcharenko Schaefer helps develop The Heritage Foundation’s research and policy prescriptions on such issues as health care reform on the federal and state levels, Medicare and Medicaid, children’s health and prescription drugs. Read her research.

This article appeared in The Daily Signal on February 19.

Image: A sign reads "Get your flu shots here" is put up at East Arkansas Family Health Center in Lepanto, Arkansas, U.S., May 2, 2018. REUTERS/Karen Pulfer Focht