Donald Trump Is Not Deporting Immigrants As Fast As His Predecessors 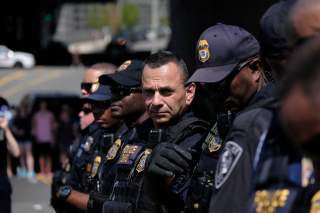 The Department of Homeland Security (DHS) recently released a report detailing deportations (henceforth “removals”) conducted by Immigration and Customs Enforcement (ICE) during the fiscal year 2019. The DHS report divides removals into two categories based on the arresting agency: those removed from the interior of the United States and those removed from the border. Interior removals are those who are initially arrested by ICE and then subsequently removed. Border removals are individuals initially apprehended by a Customs and Border Protection (CBP) officer while they attempted to illegally enter the United States. Those apprehended by CBP are still called removals because they are turned over to ICE who subsequently remove them. To a large degree, border apprehensions are independent of a president’s immigration enforcement policies because factors outside of the United States also influence whether people decide to come in large numbers. However, interior immigration enforcement is much more under the president’s control. Thus, it is important to separate border removals and interior removals when gauging the extent and effectiveness of interior immigration enforcement.

Figure 1 includes numbers for interior and border removals going back to 2003. The government didn’t start separating them in official statistics until 2008, so it has always been difficult to compare immigration enforcement in earlier eras to 2008 and after. Since the difference between a border removal and an interior removal is the arresting agency, I used TRAC data to back out the number of border and interior removals by year going back to 2003 when CBP and ICE were created. For years where ICE data and TRAC data overlap, the difference is usually less than 1 percent. Interior removals and border removals began to increase in 2007 and continued to remain high through 2011, falling thereafter.

ICE under President Obama’s administration removed an average of 1.38 percent of the interior illegal immigrant population per year of his presidency. The Obama administration’s interior removal statistics show a downward trend beginning in 2011 and continued until the end of his administration. So far, ICE under President Trump has only managed to deport an average of 0.83 percent of the illegal immigrant population each year. The annual average for the George W. Bush administration was 1.21 percent deported annually, which drops to 1.15 percent if the 2003-2006 average is applied to 2001 and 2002 as an estimate.

The Trump administration is floundering in its efforts to increase removals. President Trump is not enforcing immigration laws nearly as harshly as his two recent predecessors did.