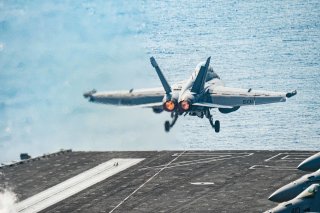 While the world continues to grapple with the Coronavirus outbreak, another crisis has been brewing below the radar in Iraq that threatens to plunge the U.S. and Iran into a disastrous war. In January, rocket attacks on U.S. military bases led to a major escalation, culminating in the assassination of Iranian general Qassem Soleimani and airstrikes from Iran on U.S. bases in Iraq. Now, just two months later, Shia militias are believed to be behind a spate of rocket attacks on U.S. bases in Iraq, belying the administration’s assertions that the strike on Soleimani was decisive and restored deterrence against Iran and the groups it supports.

There is a path out of the present predicament. President Donald Trump can sign the bipartisan war powers legislation recently passed by Congress directing the removal of U.S. troops from hostilities with Iran and offer to suspend sanctions crippling Iran's Coronavirus response, at the very least until the crisis has abated. Doing so could open the possibility of a diplomatic off-ramp from a crisis with Iran as the world turns its attention to fighting off a pandemic. The alternative is war with a regional power while both countries—the United States and Iran—struggle to contain the Coronavirus pandemic. The results would be catastrophic for both regional security, the battered economy and global health.

The latest escalation began March 11, when two U.S. servicemen and a British medic were killed in a rocket attack on the Taji base in Iraq. The next day, U.S. forces responded by conducting airstrikes against Kata’ib Hezbollah (KH) facilities in Iraq, striking five weapon storage facilities to “restore deterrence” against Iranian-backed forces.

The Iraqi military gave swift, strong condemnation of the U.S. strikes, saying that they killed three Iraqi soldiers, two police officers, and a civilian worker. In a statement, the Iraqi military said the strikes “cost the lives of Iraqi fighters while they were doing their military duty.” A second rocket attack occurred on the same base on Saturday, injuring three coalition soldiers. Two more rockets struck the Basmaya base near Baghdad on Tuesday, which hosts coalition forces, though no injuries were reported.

On the same day as the first strike on Taji base, members of the House of Representatives were on the House floor passing the bipartisan War Powers resolution (S.J.Res. 68) from Sen. Tim Kaine (D-VA) directing the president to remove U.S. forces from hostilities with Iran, reflecting widespread concern regarding the risks of the president’s current Iran policy. Having already cleared the Senate, it now faces a veto threat from the president.

Signing would be a major signal that the president is willing to turn a new page in his policy toward Iran. But to truly ease regional tensions, it should be accompanied by another key step—lifting sanctions in a humanitarian gesture as Iranians contend with the worst disease outbreak in over a hundred years.

Iran has become a major epicenter due to its own government’s slow and negligent response, in addition to crushing U.S. sanctions that have made it infinitely more difficult for Iran’s medical industry to cope with the crisis. As of March 23rd, Iran’s death toll of 1,812 with 23,049 infected shows no signs of slowing down. While European countries and the United States discuss stimulus and aid packages to help their ailing economies, Iran’s economy was already in free-fall before the outbreak, with a 9.5 percent contraction in 2019 as sanctions hammered the economy. In a sign of desperation, Iran has requested a $5 billion loan request from the IMF, the first time the country has asked for aid from the organization in six decades.

Currently, Iran is experiencing a perfect storm for the spread of the virus. The United States can’t control the Iranian government’s poor response. But it can make sure that U.S. sanctions do not stand in the way of recovery in Iran. The rampant spread of the virus in Iran is not only an Iranian issue, but a global one. We have seen Iran become the epicenter of the spread of the disease throughout the Middle East, creating a gateway for the virus from Asia to the Middle East, Africa, and Europe. Given the nature of the pandemic, the issues emanating from Iran, exacerbated by U.S. sanctions, affect the whole region and the world.

Given what’s at stake, Trump could very easily use the threat of COVID-19 to not only help the urgent humanitarian situation in Iran, but to open up opportunities to deescalate geopolitical tensions. So far, Iran has followed America's lead in escalating tensions since the withdrawal of the nuclear deal and besiegement of the Iranian economy. Iran has consistently indicated that its counter-pressure efforts would halt if the U.S. first lifted sanctions, thus opening the door to negotiations. As a result, there's little to be lost by pausing the sanctions and seeing what diplomatic doors open. Either way, it would benefit Iranians who are struggling to survive, provide respite for an already beleaguered economy, and reduce the Iranian government's state of perpetual anxiety.

Without a radical change in U.S. policy towards Iran, we seem destined to repeat the escalatory cycle, threatening to plunge the region in yet another conflict and sucking the United States into another front in its endless war at the worst possible moment. But with this crisis comes a major opportunity to choose an exit ramp, if only briefly. The Trump administration should take it to prevent a bad situation from getting far worse.

Ryan Costello is the Policy Director at the National Iranian American Council (NIAC).

Shervin Ghaffari is a Policy Analyst at the National Iranian American Council (NIAC).