Donald Trump Wants a Phase 4, $2 Trillion Stimulus (But There Is a Problem) 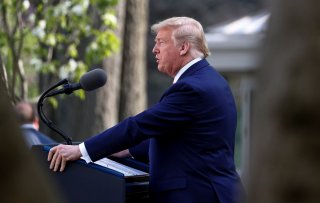 On last Friday, President Donald Trump signed into law the Coronavirus Aid, Relief, and Economic Security Act, the largest stimulus in U.S. history. Costing a total of $2.2 trillion, the bill included direct cash payments to middle-class Americans and hundreds of billions of dollars in small-interest loans to both small businesses and large corporations. Now members of congress are talking about spending even more money.

In an interview with MSNBC, Speaker of the House Nancy Pelosi outlined congress’ strategy in responding to the pandemic. “First, we had emergency. The first two bills addressed the emergency that we saw. The third bill, the second phase, was about mitigation,” she said. “Mitigation for the loss in our economy, also some setbacks we had in addressing the challenge of the virus.”

She then moved on to describing what House Democrats would like to include in the next set of legislation. This fourth bill but third phase will be about recovery. "Again, always addressing the emergency and mitigation aspects of it, but to talk about how we go forward,” she elaborated. “I want to be very specific because I hear people saying, ‘they’re doing this wish list,’ that isn’t so. We have agreed in our negotiations that everything that we’re doing is specific to the coronavirus challenge.”

President Trump, responding to her interview, said that “other than her usual complaining that I’m a terrible person, she wasn’t bad.” Trump agreed with Pelosi that congress should move on to what he referred to as the fourth phase and begin infrastructure spending. “With interest rates for the United States being at ZERO, this is the time to do our decades long awaited Infrastructure Bill. It should be VERY BIG & BOLD, Two Trillion Dollars, and be focused solely on jobs and rebuilding the once great infrastructure of our Country!” he tweeted.

Another policy Pelosi suggested this week was a rollback of SALT, a limit on state and local tax deductions. Included in the 2017 Republican tax reform law, SALT placed a cap of $10,000 on the amount a household could deduct from their state and local tax expenses.

In Pelosi’s conception, even a partial repeal would allow people to refile their taxes and reclaim money lost in 2018 and 2019. SALT primarily affected those earning more than $100,000 a year, and disproportionately hit individuals living in New York and California, both Democratic bastions.

While both Pelosi and Trump might be eager to begin passing more spending bills, Senate Majority Leader Mitch McConnell is prepared to put up a roadblock. “I think we need to wait a few days here, a few weeks, and see how things are working out,” the Kentucky Republican said in a radio interview. “I’m not going to allow this to be an opportunity for the Democrats to achieve unrelated policy items that they would not otherwise be able to pass.”

If another stimulus were in works, it should not be expected before late next month. Both houses of Congress are on recess until April 20.