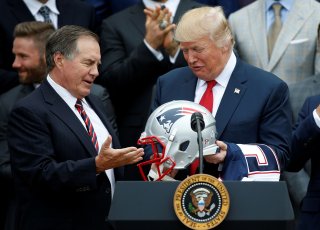 So President Donald Trump gave a radio interview last Tuesday during which he declared he would call on an unlikely source for military advice: New England Patriots coach Bill Belichick. Trump told host Hugh Hewitt, “You know, if I ever had a military battle, I’d call up Belichick and say what do you think? What do you think? Give me a couple of ideas.” The president further proclaimed that Belichick would “be as good as any general out there.” Teeth are grinding everywhere among those who wear stars.

Typical Trumpian bombast? Not necessarily. For fun let’s evaluate General (or Admiral) Belichick’s résumé—not for field or fleet commander, maybe, but for the post of military adviser to the White House.

First rating category: military background. Coach Belichick doesn’t come from a military family per se, but he does come from a family with close and longstanding military ties. For three-plus decades his father Steve Belichick served as assistant coach at the U.S. Naval Academy at Annapolis, including the glory years when quarterback Roger Staubach was winning the Heisman Trophy. Belichick père established himself as a legend in the sport, leaving behind a book hailed as the “bible” of football scouting. Belichick fils learned from the best, getting his start studying gridiron tactics and strategy by age nine. He took to lecturing coaches on defensive strategy by age ten. His upbringing mingled football with naval affairs.

Such a prodigy might well have valuable insight into warlike endeavors.

Hewitt pointed out that Belichick amassed a less-than-awe-inspiring record as head coach for the Cleveland Browns (1991-1995). His teams made the playoffs only once and posted a losing record during his tenure. Only when he landed in Foxboro, Massachusetts, and teamed up with the greatest quarterback of all time did his career flourish. The Patriots made it to nine Super Bowls (thus far) and won six. In the process Belichick made his case for being anointed the greatest NFL coach of all time.

That mixed record should give Trump pause, but it shouldn’t be a dealbreaker. In sports as in military life—or any other field of endeavor—a leader must happen upon the right times, circumstances, and people to achieve greatness. Alabama’s Nick Saban, probably the greatest college coach of all time, won a national championship at LSU, was a disaster for the NFL’s Miami Dolphins, and then returned to campus at Alabama and won five more championships.

Success is contingent—even for the best. Belichick’s record in Cleveland is no stain on his candidacy for military adviser.

Second rating category: suitability for geopolitics. The coach appears fit for the times, especially the way things are shaping up in the Western Pacific. Pentagon strategy vis-à-vis China involves staging a type of perimeter defense along Asia’s first island chain in order to blockade Chinese shipping within the China seas. Missile-armed ground troops on the islands will fight alongside ships, submarines, and aircraft lurking in nearby skies and seas in order to plug the straits against a breakout. They will make the island chain a solid barrier.

Sounds familiar, doesn’t it? Look at your map. The island chain resembles a football line of scrimmage. A defensive mastermind like Belichick could help devise blocking schemes to make the line impenetrable, much as his Patriots defenses excel at making things tough on opposing offenses. Some combination of small craft and ground forces sealing up narrow seas with capital ships and warplanes acting as linebackers and safeties in the Western Pacific would make for a formidable defense in depth. The defensive line would limit and channel any Chinese breakout. Then U.S. Navy and Air Force units roaming the defensive backfield would pounce on whatever People’s Liberation Army (PLA) ships or planes managed to get through.

Team China would find itself trapped in its own backfield, unable to do much in the Western Pacific or points beyond.

While the football analogy to island-chain defense is striking, it’s obviously not an exact analogy. If the island chain is the line of scrimmage, the defensive linemen—the islands—are immobile. An island is impassable to shipping. That’s good. But unlike a Patriots lineman, it can’t shift from side to side or undertake some crafty blocking scheme to stymie the offense. Furthermore, Asian islands are irregularly spaced, unlike a standard football defensive or offensive line. For example, Miyako Strait, south of Okinawa—the PLA Navy’s favorite entryway into the Western Pacific—is about 150 miles wide. Shutting that seaway will demand an extra measure of defensive wizardry.

But there are more fundamental differences between football and the great game of geopolitics. Football combat takes place on a flat rectangular plain of precise dimensions. Sea combat takes place on a flat plain as well—but only if the battlefield is far from land, on the open sea where no land features impede movement. That is not the case in the Western Pacific. Close to land, sea combat has to take account of terrain lest ships find themselves aground. Scattering obstacles around the gridiron would make football resemble littoral fighting more closely. (The Rock should explore that twist to the game now that he has acquired the XFL.) Nor are there sidelines or yard lines delimiting the battlefield, as there are on the football field. The nautical battleground is an open system; the gridiron is a closed system.

Football, furthermore, is heavily regulated whereas combat is barely regulated at all. Team rosters are equal in numbers, which is why coaching staffs put such effort into drafting playmakers during each offseason. Recruiting talent is their only way to create a mismatch at one position or another. By contrast, armed forces can hurl as much of their strength into the fray as commanders choose. In fact, they have an incentive to create a numerical mismatch at the crucial place and time. All the better if they have playmakers to commit to action, such as stealth aircraft or long-range precision artillery. In that sense China enjoys a more imposing homefield advantage than any NFL team. No fight in the Western Pacific will be a purely navy-on-navy affair. The PLA Air Force and Rocket Force can pepper the visiting team with missiles and airstrikes. That’s the equivalent of the home team’s sending in extra players from the bench willy-nilly, or exhorting rowdy hometown fans to fling rocks at the visitors. Plainly Belichick has never had to contend with conditions that unstructured.

Then there’s the rhythm of the game. Football is highly scripted. Military forces pound away at each other continually, or at least they should if commanders covet decisive results. Football teams interrupt continuity both within and between games. Play halts between downs, and the teams get a short interlude to call the next play and perhaps adjust their tactics or strategy or buck up morale. Games also take place for a defined length of time. It is possible for one team or the other to slow down the tempo through the plays the leadership calls. There is no way for playcallers to protract the game indefinitely—a stratagem commonly practiced by weaker contenders in warfare.

Football contests, then, end on a more or less predictable deadline. After the game clock runs down the team gets a week to recuperate, study game film, correct deficiencies from the previous contest, and analyze and strategize against the next opponent. Warriors get no scheduled respite. War only ends on a deadline if one team manages to impose one through force of arms. Moreover, chances are no rival team will launch an attack on an NFL club at midweek in hopes of catching players and coaching staff unawares. With no referees or league officials to keep order, military commanders have every incentive to harness deception and surprise when formulating their game plans.

The last clear difference between football and littoral warfare is that there’s no martial equivalent to the passing game. The quarterback can throw the ball downfield to vault over the defense, and thus advance without breaking through the defensive line. China’s forces can vault over the island chain at least to some extent, aiming missile and air strikes at their opponents. But it’s not the same thing. The silly Monty Python-esque equivalent would be arming the quarterback with hand grenades instead of the pigskin, and letting him try to take out opposing players through accurate passing. Defenders would scramble to evade an exploding forward pass rather than rush to the ball in hopes of intercepting it or breaking up the play. The analogy just doesn’t fit.

All of that being said, perimeter defense is perimeter defense. To envision how to defend the first island chain, a primarily maritime venture, it would be worthwhile to review how armies defend distended lines on land. For example, trench warfare on the Western Front of World War I has much to teach even though the times, the setting, and the antagonists differed starkly from the Western Pacific today. Just because an analogy is inexact doesn’t negate its value as an intellectual tool. In fact, identifying differences between two things enlightens just as much as unearthing likenesses does.