Donald Trump's Next Big Headache: China and Taiwan Set for a Collision Course? 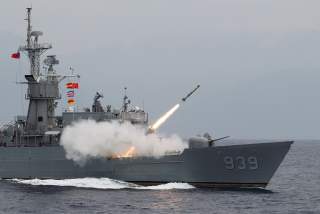 The Chinese military is flexing its muscles in the Taiwan Strait in response to last month’s electoral triumph by Taiwan’s pro‐​independence Democratic Progressive Party (DPP). President Tsai Ing-wen’s landslide reelection, combined with the DPP’s retention of a majority in the legislature, infuriated Beijing’s leadership. A dangerously provocative response was not long in coming.

Acrimonious bilateral relations took on a worrisome military dimension early this week. Despite the onset of the coronavirus crisis and the pervasive disruptions it has caused, the Chinese government found time to orchestrate a show of force in the Strait. Taiwan’s air force scrambled for a second day in a row on Monday to intercept Chinese jets (both fighters and bombers) that briefly crossed an unofficial, but very important, mid‐​line in the Strait, prompting Taipei to dispatch F‑16s to intercept and give blunt verbal warnings to leave. The Chinese planes then withdrew to the western side of the line.

Although China has been flying “island encirclement” drills periodically since 2016 when Tsai first took office, this was only the second occasion that its military aircraft crossed the median line. Beijing’s subsequent comments emphasizing that the flights were meant to hone the military’s combat capabilities were hardly calculated to reduce tensions. China’s Eastern Theatre Command implicitly identified the motive for the latest drills, stating that “Taiwan independence forces have ignored national justice and stepped up their pursuit of independence.”

Overall tensions between Beijing and Taipei have been rising since Tsai’s reelection. The DPP’s emphatic victory eradicated any lingering hopes Chinese leaders harbored that Tsai would be a one‐​term president and cross‐​strait relations would return to “normal.” The results were an emphatic endorsement of Tsai’s uncompromising policy toward the mainland, and she lost no time in acting on that mandate. Her initial comments seemed almost calculated to escalate tensions with the mainland. “We don’t have a need to declare ourselves an independent state,” Tsai told the BBC. “We are an independent country already.”

Other Taiwanese political figures occasionally had expressed similar sentiments over the years, noting that the Republic of China (Taiwan’s official name) predated the establishment of the People’s Republic of China and that Taiwan had never been part of the PRC. But Tsai appeared to go further, insisting that Beijing “must accept” the reality of Taiwan’s already independent status. She also used a new formulation of the official name, noting that “we call ourselves the Republic of China, Taiwan.” It was a subtle change but an important one, since it underscored Taiwan’s political separation from the mainland.

Beijing’s conduct regarding the coronavirus crisis also has further poisoned bilateral relations. Taipei accuses the Chinese government of preventing Taiwanese health officials from accessing full information that the World Health Organization provides or attending WHO meetings. Beijing apparently fears that accepting such participation might implicitly afford Taiwan recognition as an independent state. Taipei’s reaction is caustic. China should focus on controlling the spread of the virus, rather than threatening Taiwan, Tsai said on Monday, following the second confrontation in the Strait. Beijing’s callous willingness to impede important international cooperation on a dangerous public health issue is disturbing, but it indicates the current woeful state of relations between the mainland and Taiwan.

The air incidents over the Taiwan Strait give that already acrimonious relationship a dangerous military dimension. Washington needs to carefully reassess its own policy on the Taiwan issue. As I discussed in a recent American Conservative article, under President Trump and a strongly pro‐​Taiwan Congress, U.S. policy has become increasingly supportive of Taipei without much apparent thought about the potential consequences.

Not surprisingly, Beijing views the proliferation of pro‐​Taiwan measures with great irritation. Washington policy is extremely risky, given the ominous direction of relations between Taiwan and the mainland. Under the 1979 Taiwan Relations Act (TRA), the United States made an implied commitment to defend the island’s security and de facto independence. The wisdom of that commitment, given the PRC’s mounting economic clout and increasingly potent military capabilities, is highly questionable. U.S. officials and the American people must not assume that supporting Taiwan is just a low‐​risk diplomatic gesture. Given the deterioration of relations between Beijing and Taipei, the United States may soon face a situation in which it is called upon to honor its TRA security commitments. Doing so, though, could have catastrophic consequences. We need to reassess U.S. policy regarding Taiwan now, not in the midst of a full‐​blown crisis.