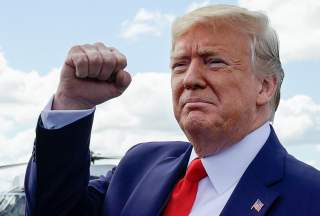 The Obama administration, including the president, was often criticized for seeming to acquiesce to a “new normal” reality of economic stagnation. That seems to be what President Trump was referring to during his SOTU address when he said, “In just three short years, we have shattered the mentality of American decline, and we have rejected the downsizing of America’s destiny.”

But there’s scant evidence the American economy has launched into a significantly higher growth trajectory. The final three years of the Obama presidency saw real GDP growth average 2.3 percent a year vs. 2.5 percent during Trump’s first three years. And four of the past five quarters have seen annualized GDP growth of 2.1 percent or less. And as for 2020? About the same. Goldman Sachs, for instance, looks for growth of about 2.2 percent — assuming we’re done trade–warring for a while.

That forecast shouldn’t be too surprising. As an Obama White House economist wrote back in 2013: “In the 21st Century, real GDP growth in the United States is likely to be permanently slower than it was in earlier eras because of a slowdown in labor force growth initially due to the retirement of the post-World War II baby boom generation, and later due to a decline in the growth of the working age population.” It’s a statement that describes what this CBO chart illustrates:

Without much faster productivity growth, even a Two Percent Economy will be tough to achieve consistently. That demographic reality is also part of the slow-growth thesis put forward in Fully Grown: Why a Stagnant Economy Is a Sign of Success by University of Houston economist Dietrich Vollrath. As summed by John Cassidy in The New Yorker:

As countries like the United States have become richer and richer, Vollrath points out, their inhabitants have chosen to spend less time at work and to have smaller families—the result of higher wages and the advent of contraceptive pills. G.D.P. growth slows when the growth of the labor force declines. But this isn’t any sort of failure, in Vollrath’s view: it reflects “the advance of women’s rights and economic success.”

Fine. But what about that other bit, productivity — can we do better? The Trump tax cuts were supposed to help by boosting investment. And perhaps with less trade war uncertainty for business they will. Productivity might also get a boost as technologies like AI and robotics continue to advance and we figure out how to best use them.

I would urge policymakers unwilling to accept two percent growth as far as the eye can see to check out two papers. First, “Digital Abundance and Scarce Genius: Implications for Wages, Interest Rates, and Growth” by Seth Benzell and Erik Brynjolfsson. The researchers suggest the scarcity of highly skilled “superstars” could be one factor limiting economic growth from “dramatic advances in digital technologies.” As a fix, they encourage high-skill immigration, the teaching of creative skills in education, and widen access to top universities.” Then there’s “A Toolkit of Policies to Promote Innovation” by economists Nicholas Bloom, John Van Reenen, and Heidi Williams who evaluate a variety of innovation policies. From the paper:

In the short run, research and development tax credits and direct public funding seem the most effective, whereas increasing the supply of human capital (for example, through expanding university admissions in the areas of science, technology, engineering, and mathematics) is more effective in the long run. Encouraging skilled immigration has big effects even in the short run. Competition and open trade policies probably have benefits that are more modest for innovation, but they are cheap in financial terms and so also score highly.