Don't Get It Twisted: Afghanistan is Not Vietnam 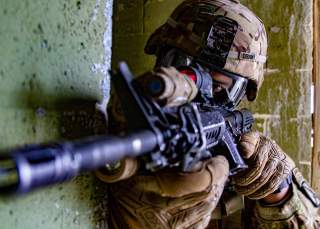 Afghanistan isn’t Vietnam. It isn’t even Iraq. George W. Bush did not lie America into this war. He, Barack Obama, Donald Trump, and their generals and diplomats didn’t conceal the challenges and failures the US was facing. The “revelations” in The Washington Post are only new to people who have forgotten front page news from a few years ago. The documents The Post obtained just aren’t the Pentagon Papers, however much some would like them to be.

The US entered the war in Afghanistan following the most devastating terrorist attack in history, prepared and launched from that country. Support was overwhelmingly bipartisan; the AUMF passed the House in 2001 420–1. Public support for the war in October 2001 was 88 percent.

None of that support was based on a lie, questionable intelligence, or some modern Gulf of Tonkin incident. It was based on video of the smoking ruins of the World Trade Center and the knowledge, never questioned then or since, that al Qaeda conducted the attack from a safe haven in Afghanistan.

Bush did not rush to war. He issued an ultimatum to the Taliban, who had invited Osama bin Laden to make his base in their territory in the 1990s and were hosting him when he launched his attack: Hand bin Laden over to us or face war. The Taliban refused, lining up with bin Laden even after the 9/11 attack and making clear that they would continue to host and protect him as he prepared other such attacks. Only then did Bush order the US military to work with local Afghan partners to take down the Taliban regime and deprive al Qaeda of its Afghan sanctuary.

The US then faced a quandary: how to extricate itself from Afghanistan without giving al Qaeda the opportunity to rebuild its sanctuary and resuming planning and conducting attacks on the American homeland. Bush ran in 2000 on a platform opposing nation-building and protracted wars (he was thinking of the Balkans) and rushed to hand the Afghan problem over to the international community and NATO. That was a mistake — but a mistake born of the desire to get out of Afghanistan quickly, not to make it Nirvana in the Hindu Kush.

The years that followed saw mistakes compounded. The Iraq War distracted attention from Afghanistan, which the Bush administration allowed to drift. President Obama, who had run on a platform of ending the Iraq War to refocus on Afghanistan, ordered a surge of military forces to combat the rising Taliban insurgency that was threatening to recreate space for al Qaeda in Afghanistan. That surge was necessary and achieved important gains. He also ordered a massive surge of reconstruction, spending dollars on the theory that building Afghan governance and alleviating economic grievances was at least as important as military operations to securing America’s gains and, once again, allowing the US to get out of Afghanistan as quickly as possible — his constant aim.

The surge of reconstruction spending and mistaken military contracting practices supporting the surge of forces fueled the already massive corruption that was actually doing more than anything else to drive the insurgency, however.

This corruption and the problems it caused were no secret. Gen. Stan McChrystal, who took command in Afghanistan in 2009, identified bad governance including corruption as coequal with the Taliban as the principal threats to the success of American operations in his report to President Obama. That report was leaked, published, and widely discussed at the White House and in the media. Gen. David Petraeus, his successor, established Task Force Shafafiyat under the command of H. R. McMaster explicitly to combat corruption in the Afghan government even as he intensified efforts begun by McChrystal to address bad practices in military contracting. All these problems and efforts were publicly announced and discussed.

Did American civilian and military leaders attempt at times to portray overly positive views of the situation in Afghanistan? Of course. The phenomenon of spin is not new, nor is it confined to wars. It is a deplorable but inevitable element of our social and political discourse about almost anything.

But did American leaders systematically lie to the American people about the situation in Afghanistan, conceal from them the problems we were facing there and even the problems our mistakes were causing, or otherwise prevent them from understanding what was really going on? Absolutely not.

The best evidence for that is the steady erosion of public and congressional support for a war begun with such widespread and bipartisan support. That erosion resulted not just from war-weariness or innate skepticism, but rather from the continuing stream of statements and reports by civilian and military officials in Afghanistan and in Washington, and the honest reporting of journalists who traveled freely to and often throughout Afghanistan, about the mistakes being made and the challenges encountered. Americans knew about the problems and mistakes as they occurred, even if we have now forgotten that we did.

Afghanistan today is hardly Vietnam in 1972. American military forces there are set to drop below 10,000 — and that small number is engaged only in providing air, intelligence, and other limited support to the several hundred thousand Afghans fighting the Taliban, al Qaeda, and ISIS, along with US Special Forces continuing to fight terrorists.

The hysteria now whipped up by The Post series is feeding the “end endless wars” mantra of those who just want to pull even those limited forces out of Afghanistan without giving any thought to the consequences (or denying that there will be consequences).

There would be a consequence, however: casting aside the critical gains we made in 2002 and have not yet lost in Afghanistan — the disruption and expulsion of the group that attacked our homeland in 2001, the establishment of a base from which to continue to target its leaders in Pakistan, and the denial of a revived Afghan sanctuary to it and its ideological brethren.

That would be a terrible mistake — the greatest of all we have made in Afghanistan.

This article by Frederick W. Kagan first appeared at the American Enterprise Institute.