Don't Like Trump's North Korea Strategy? The Democrats Have Nothing Better 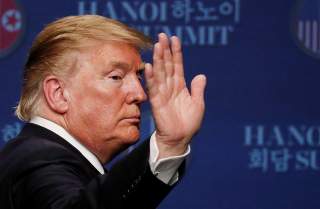 The process and imagery especially have been dazzling, but below all the glitz, there has been little movement on core issues. North Korea still has all its nuclear warheads and missile. The U.S. still insists on sanctioning North Korea. The peninsular stalemate is ongoing.

Election years offer a chance for a re-evaluation of the major policy initiatives of the current administration. Much of the Democrats’ interest in their Iowa debate this month focused on Iran. Trump nearly launched a war against that country twice. But Trump may well strike a deal with North Korea this year if only to enhance his re-election chances. At some point, the surviving Democratic candidates, and almost certainly the nominee, will address Pyongyang and its nuclear weapons.

So far though, comments in the debates have been quite sparing. Not even China got much mention at this month’s gathering. As Daniel Drezner pointed out, the candidates’ foreign policy commentary seems to flow from their domestic critiques of either the economy, for the progressive candidates (Elizabeth Warren, Bernie Sanders), or Trump himself (Biden, Peter Buttigieg). A nice summary of their North Korea positions is here. There is not much there which is new: traditional emphases on negotiations, deterrence, and allies, with a focus on (highly unlikely) denuclearization.

That traditionalism is the key substantive difference with Trump of course. Trump has pursued his North Korea outreach with mixed regard for American regional allies. Trump’s war threats of 2017 were uncoordinated with South Korea, as were his three summits with Northern supreme leader Kim Jong-un. Trump has also pursued a very unrealistic maximal denuclearization goal, but one suspects he would take a much softer deal for the sheer theatricality of a U.S.-North Korea breakthrough.

And there is the second major difference – style. The Democrats all embrace pre-Trump diplomatic behavior – consultation with allies, international organizations, cautious, stylized rhetoric, and so on. Trump, by contrast, has engaged in an unpredictable, one-man, made-for-TV diplomacy on North Korea, with occasionally bizarre results – ‘love letters’ with Kim, or Trump burgers. Trump pretty clearly enjoys the off-beat TV coverage. This method is unlikely to change.

Trump’s opponents will likely celebrate this return to pre-Trump form. My guess is that as president, the Democratic candidates would handle North Korea much as former President Obama did: They will make a few serious outreach efforts. North Korea will either cheat (as it did under Obama) or spurn the outreach (because Trump was so much more flexible). The Democratic president will then fall back on deterrence and allies.

North Korea’s nuclear missiles will make this harder for the would-be Democratic president than it was for Obama. Congressional Republicans will push much harder regarding North Korea than they did under Obama, because the North now has intercontinental ballistic missiles that can strike the US. But given that our options to denuclearize Pyongyang are so poor – either force or major concessions – I believe that the status quo – containment, sanction, isolation, and deterrence along with a grudging adaptation to North Korea as a nuclear weapons state – will persist. Trump for all his threats and blandishments has more or less done the same.

This reinforces a point I increasingly make in my North Korea writing: the status quo on the Korean peninsula is deeply baked-in. The political and strategic gaps between the U.S. and South Korea (and Japan and Europe), and North Korea are enormous, as is the moral gap. North Korea is the most monstrous totalitarianism in history. Trust is extremely low. Indeed, perceptions of reality are likely even different, with both the North Korean elite and the Trump administration operating in distinct intellectual bubbles. Hence, any deal with Pyongyang will be fraught and tentative.

Dovish commentators particularly, who often claim that creative U.S. and South Korean thinking and bold leadership can break the ossified stalemate, miss just how deeply sunk-in the stalemate really is. This is why Trump, for all his flair and self-belief in his negotiating skills, has failed to date. Similarly has South Korea’s current dovish president, Moon Jae-In broadly failed in his outreach efforts. If leadership is to be the solution to rigid immovable structures, then a North Korean version of Mikhail Gorbachev and his ‘new thinking’ reformers is also necessary as a partner. Only some relief of North Korea’s Orwellianism will convince deep skeptics (conservatives mostly) in South Korea and the US that dealing with North Korea is not appeasement. Indeed, so sharp was this appeasement fear over Trump’s meeting with Kim at last year’s Hanoi summit, that Trump felt compelled in the following press conference to assert that he did take a bad deal because he knew the press would criticize him.

This does not mean that dealing with the North is impossible. Small deals on the order of Obama’s Leap Day Deal are worth trying. That deal was limited and recognized the huge trust gap. It tried to improve things in small, measurable ways, opening the door to further deals down the road if it worked out. (As it turns out, the North Koreans cheated.) But the massive gaps between the two do mean that huge, one-shot breakthroughs with the North – of the sort Trump wants and might net him that coveted Novel Peace Prize - are all but impossible (barring appeasement-level concessions we should not make).

All this is the likely reason the Democrats’ North Korea commentary is so uncreative and backward (to Obama)-looking. The years of Trumpian hijinks have demonstrated just how limited are the options really are.