Doomsday Is Only 2 Minutes Away 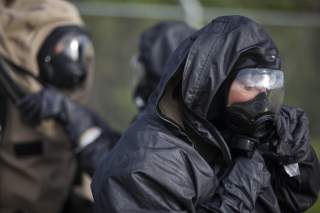 The scientists, physicists, and nuclear experts at the esteemed and internationally-renowned Bulletin of Atomic Scientists delivered a shot to the world’s gut on January 24. With nuclear states investing large sums of money in nuclear modernization programs, current arms control agreements slowly dying, and the perils of climate change becoming ever more apparent, the Bulletin has set the “Doomsday Clock” to two-minutes to midnight. In layman’s terms, the world is the closest it has ever been to an extremely perilous catastrophe since 1953, when the former Soviet Union exploded its first hydrogen bomb and NATO and Warsaw Pact forces were staring each other down in Germany, missiles ready.

In the words of former Secretary of Defense William Perry and former California Governor Jerry Brown, “a new Cold War is underway - one equivalent to the most dangerous year of the first Cold War. Once more, we're putting at risk the survival of civilization.”

Perry, Brown, and the rest of the greybeards at the Bulletin have a point. While one can argue that the language they use is a bit over-the-top (does anyone really believe Washington and Moscow are going to stumble into a war or lob nuclear-tipped ICBMs at each other’s capitals anytime soon?), their concern about a planet creeping ever closer to a potential nuclear conflagration or great power conflict is on firm standing. With countries like Russia and China becoming ever more powerful and ever more comfortable in leveraging that power to defend their own national security interests, the global security landscape is now characterized by multiple hot-spots that could erupt into a hot war if not managed properly. Reading the news these days, it’s easy to assume that it’s only a matter of when—not if—the world is thrown into another emergency. Chinese and U.S. warships flexing their naval muscles in the South China Sea; Moscow taking Ukrainian sailors captive in the Kerch Strait; the unpredictability and bellicosity of Donald Trump; the mischievous machinations of Vladimir Putin; a Saudi-Iranian strategic rivalry bleeding into other countries—any number of disputes could escalate into a mishap, which could then escalate into a shooting war.

And as the Bulletin notes in its Doomsday warning, nuclear nonproliferation agreements that were previously taken for granted are being ripped apart by a U.S. administration that doesn’t particularly care about multilateralism in general. President Trump’s May 2018 decision to withdraw Washington from an Iranian nuclear deal the vast majority of the world supports—and one which the International Atomic Energy Agency has positively verified more than a dozen times—was a pointless exercise driven just as much by domestic politics as a legitimate desire to pressure Tehran into acting with more restraint. European governments are desperately flailing around, establishing new payment mechanisms with the Iranians in the hope that keeping trade going will convince Tehran that the deal is still worth preserving.

The Intermediate-Range Nuclear Forces Treaty, the Cold War-era pact signed by President Ronald Reagan and Soviet Premier Mikhail Gorbachev that abolished missiles between the ranges of 500-5,500 kilometers, is as good as dead. Washington’s decision to walk away from the treaty rather than accept Moscow’s offer to inspect the 9M729 missile system under discussion was condemned by a wide section of the arms control community as highly irresponsible. Indeed, the Trump administration’s withdrawal is likely the final nail in the coffin to a thirty-year accord that had kept long-range missiles out of Europe.

If the 2011 New START treaty is not extended by 2021, the United States and Russia will enter a world where unrestricted nuclear growth is the new normal. As the Bulletin wrote, “For the first time since the 1980s, it appears the world is headed into an unregulated nuclear environment—an outcome that could reproduce the intense arms racing that was the hallmark of the early, unregulated decades of the nuclear age.”

Thankfully, we are still two minutes from doomsday. Human civilization can still save itself before a combination of unregulated state-to-state competition, poor leadership, miscalculation, warming temperatures, food scarcity, desires for hegemony, or any of the other frailties of the human race contribute to a global apocalypse. But it won’t occur by the forces of nature. The planet’s leaders have to make it happen. Whether that’s through new arms control deals that place a check on the nuclear arsenals of multiple countries, permanent communication channels between adversaries, or the elevation of brand new leadership, none of us should be comfortable watching the Doomsday Clock hit the stroke of midnight.