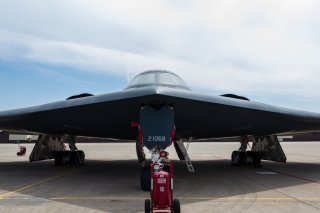 A Bulgarian newspaper says the Chinese People’s Liberation Army Air Force (PLAAF) is preparing its new stealthy Xian H-20 bomber for its first flight. The essay, from July 2022, cites Chinese officials saying the aircraft will soon be “revealed.” It is a much anticipated, next-generation stealthy B-2- or B-21-like stealth bomber platform slated to become operational this year or next year.

While the H20’s configuration and performance parameters are likely to be of great interest to the Defense Department, there have not been many images, renderings, or actual “appearances” of the aircraft in advanced stages of development close to operational status.

Therefore, although the H-20 still remains largely mysterious, it may not be a true rival to the Air Force’s new B-21.

However, the H-20 was cited in the Defense Department’s 2018 and 2019 annual “China Military Power Report.” The 2019 report specifies that the new H-20 will likely have a range of “at least 8,500km” and “employ both conventional and nuclear weaponry.”

The image shown in the Bulgarian military report shows angled “wingtips” as opposed to a sleek, flat, straight wing like that used by the B-2 and B-21. A slightly protruding and angled “upward” structure suggests that the platform will be a little less stealthy than a straight wing design would have been, as it would be more likely to generate a return “ping” or radar signature to enemy air defenses. Yet the picture of the H-20 appears to show that the wing tips are “foldable,” meaning they can straighten. This means the bomber may have a stealthier configuration available to it, although the introduction of a  detectable “seam” or “break” is less ideal than having a smooth exterior.

The H-20 does, however, have a flattened or blended wing-body structure which actually looks a little more horizontal than a B-2 Spirit. This may at least in part be due to the fact that the engine “inlets” are built into the front of the wing-body structure itself and not on top of the fuselage as they are in a B-2.  Does this make it a bit stealthier? That is unclear. The B-2 and the B-21, according to pictures, have very “rounded” or “blended” engine inlets making for a very stealthy surface.

The H-20’s anticipated performance success or ability to rival the B-21 Raider remains unknown, and likely will be determined by the effectiveness of radar absorbent materials and thermal management intended to reduce the heat signature. But beyond stealth, the H-20’s combat power will be determined by what kinds of sensing, computing, mission systems, weapons, and fire control systems it employs. Should it be unable to rival U.S. equivalents in those capacities, the H-20’s stealth properties would be less impactful.

Adding to U.S. concerns is that China’s new H-20 bomber is expected to fly alongside and ultimately replace the Xian H-6 bomber. However, part of why the H-6 continues to be extended relates to the time it may take to produce and deploy the H-20 in sufficient numbers.

This kind of phased pattern does, to some extent, resemble the U.S. Air Force’s plans with the B-2 and B-21 bombers. The thirty-year-old B-2 is expected to fly for many more years until sufficient numbers of the B-21 arrive. Therefore, much like China has sought to keep the H-6 relevant, the B-2 continues to be upgraded with new weapons, sensors, and computer technology to propel the aircraft into future years. The B-2 bomber, for instance, is receiving advanced new Defensive Management System sensors designed to locate and help the aircraft elude enemy air defenses. The old stealth bomber is also receiving a new 1,000-fold faster computer processor and upgraded variants of the B-61 Mod 12 nuclear bomb.