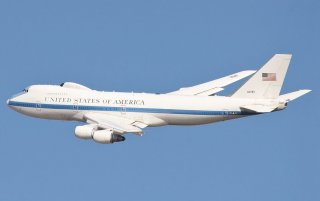 That National Airborne Command Operations Center (NAOC) is a key component of the National Military Command System for the President, the Secretary of Defense and the Joint Chiefs of Staff. It was created so that in the event of a national emergency or an unthinkable scenario such as a nuclear war it couldn’t be taken out by the enemy. The reason is that this center isn’t a place—it is a flying command post that could continue to operate even if ground command control centers were destroyed.

The E-4B Advanced Airborne Command Center, fittingly known as the “Doomsday Plane,” is a militarized version of the Boeing 747-200, four-engine, swept-wing, long-range high-altitude airplane that is capable of refueling in flight. The E-4 took over the mission of the EC-135 flying command post aircraft in 1974, and by the mid-1980s all had been updated to the B models. All E-4B aircraft are assigned to the 595th Command and Control Group at the Offutt Air Force Base, Nebraska, which is aligned under the Eight Air Force.

The aircraft carry 13 external communications systems and are designed for missions lasting 72 hours. As Defence Blog reported, at least one plane is always on 24-hour alert, 7-days a week with a global watch team at one of many selected bases throughout the world. The NAOC operations team is made-up of joint personnel including Airmen, Soldiers, Sailors and Marines with a variety of specialties.

Each of the aircraft are protected against the effects of electromagnetic pulse and feature electrical systems designed to support advanced electronics as well as a wide variety of communications equipment. There are also nuclear and thermal effects shielding, which can protect the aircraft in a true doomsday scenario.

However, the Doomsday Planes aren’t invincible as The Drive reported. A tornado that hit Offutt Air Force base in 2017, which left only one of the Air Force’s E-4Bs operational for three months. The EF-1 tornado caused $20 million damage to the base and aircraft, including more than $8 million to repair two of the E-4Bs that had been at the base at the time. Fortunately, one of the other aircraft was undergoing an overhaul at its depot in San Antonio, Texas, but that still left the Air Force with just a single E-4B.

Despite the fact that the Nebraska air base is home to the four aircraft—and is in “Tornado Alley”—there isn’t actually a hanger large enough to fully shield the aircraft from such a storm. Yet, moving the aircraft requires time and planning, which can be far from practical.

While the Air Force did a tremendous job of getting the damaged aircraft back in the air as quickly as possible, this highlighted the need to potentially replace the aging E-4Bs with a more modern plane.

Fortunately, the Air Force also has its 16 E-6B aircraft, which are the military variants of the Boeing 707 airliner. Its basic mission is known as Take Charge and Move Out (TACAMO), which allow it to maintain the communication link between the national command authority and U.S. nuclear forces. In this capacity the E-6Bs serve as a backup for the larger E-4s—meaning that no matter what happens on the ground the Air Force’s various Doomsday Planes will ensure the lines of communication can’t easily be cut or taken down.