Double Trouble: Why Crops Have to Face Insects and Climate at the Same Time 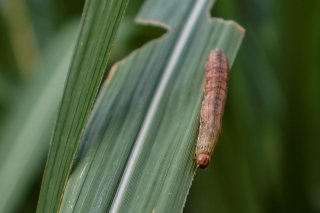 For millennia, insects and the plants they feed on have been engaged in a co-evolutionary battle: to eat or not be eaten. Until recently, the two antagonistic sides have maintained a stalemate of sorts. With climate change, however, warmer temperatures could tip the balance in favor of the insects and spell danger for crops and the farmers that tend to them.

Our research team at Michigan State University’s Plant Resilience Institute watched what happened in hotter weather when hornworm caterpillars attacked a tomato plant. The tomato lost. We saw a surprising trade-off by the plant during the heat wave: It defended itself against the caterpillars but this effort prevented it from dealing with the harmful effects of heat. This caused the plant to overheat, which strengthened the caterpillars’ hand.

A study by researchers in 2018 predicted that each degree of global warming will increase crop loss from insects by 10% to 25% because insect populations and their appetites surge in warm temperatures. Other climate-related variables, including prolonged droughts or floods, are likely to compound those losses.

But although scientists have identified these varied challenges to food production, they still don’t know much about how the combination of heat and insects will affect the plants’ built-in defense systems.

Plants constantly sense and respond to changes in their environments, including the presence of plant-eating insects.

How plants fight off insect pests

Unlike animals, plants cannot run or hide from predators. Instead, plants produce an arsenal of toxic chemicals that repel attack by insects and other plant consumers.

Producing these compounds is costly and often stunts their growth, so plants deploy this chemical defense arsenal only when damaged by a chewing insect. This process is triggered by the plant wound hormone, jasmonate, which tightly controls the biosynthesis, distribution and storage of chemical defense compounds that repel insects.

For more than 20 years, we have studied how jasmonate protects plants from insect herbivores. Only recently have we begun to think about how rising global temperatures influence this common plant defense mechanism.

Heat and the hungry caterpillar

In our study we challenged tomato plants with hornworm caterpillars under either normal temperature conditions: 82 degree F days (about 28 degrees C) and 64 degree F nights (about 18 degrees C). We also simulated heat waves, with temperatures rising to 100 F (38 C) in the daytime and falling to 82 F (28 C) at night for several days.

The plants responded to the hotter temperatures by intensifying production of jasmonate and, as a consequence, increasing the output of various defense compounds. Even so, insects ate the plants relentlessly in the heat.

Meanwhile, a parallel study by our team found that moderate increases in temperature speeded up the insects’ metabolism so that they ate faster and did more damage to the plants. Although tomato plants fought hard with their chemical response, they couldn’t neutralize the insects’ powerful heat-triggered eating stimulus.

Models may underestimate crop losses due to climate change because they don’t consider how infested plants react to rising temperatures.

Plants use two strategies to cool down when temperatures get too high. They will open their tiny leaf pores, which are called stomata, releasing water that cools them much as sweating cools humans. Plants also combat heat stress by lifting their leaves away from the hot soil, perhaps in search of a cool breeze.

We unexpectedly discovered in our work that tomato plants challenged by caterpillars at the warmer temperature didn’t do these things, and thus failed to cool their leaves.

In our follow-up experiments, we found that when caterpillars ate its leaves and the plant activated the hormone jasmonate, this blocked the opening of the tiny stomata, and also prevented leaves from lifting up to cool. The plant couldn’t deploy its cooling response, and at the same time photosynthesis (making food from sunlight and carbon dioxide) was reduced.

These circumstances effectively slow the growth of the plant. Thus, although tomato plants can cope well with insect attacks or elevated temperature, if those two stresses come at the same time, that spells double trouble. The result is rapid defoliation by hungry caterpillars plus leaf overheating.

Why insect attack keeps the plants from cooling themselves remains a mystery. However, when plants close their stomata during an insect attack, they conserve water by preventing it from evaporating from wounded leaves. We think this response may benefit the plant when water is in short supply, which is often the case during heat waves.

We plan to address this question by studying plants grown in the rough-and-tumble of natural environments, rather than under highly controlled laboratory conditions. We believe such studies are necessary to develop crops that can withstand both heat and wound stress.

Many experts estimate that agricultural productivity must double in the next 30 years to meet the demands of a rapidly growing population. Current yield trajectories for major crops, combined with the uncertain impacts of a changing global environment, suggest that the world will fall well short of this demand using conventional agricultural practices.

The United Kingdom’s Royal Society and other scientific organizations have called for a Second Green Revolution that will permit the sustainable intensification of agriculture through development of crops that are more resilient in face of increasingly harsh environmental conditions.

Recent technological advances, from genomics and gene editing to computational and data science approaches, provide researchers with unprecedented opportunities to work toward this goal. In achieving a better understanding of the complex interactions of heat and insect attacks, we hope that our research may inform new strategies to increase plant resilience in a warming world.