Douglas A-1 Skyraider: This Old Looking Plane Was a Vietnam War Warrior 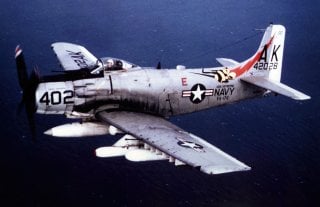 Described as a “flying anachronism,” the single-seat Douglas A-1 Skyraider–affectionately known as the Spads, after the French wood-and-wire World War I fighter–proved that a piston-powered, propeller-driven attack aircraft still had a place in the jet age. The aircraft, which entered service in the late 1940s, provided close-air support for American and South Vietnamese troops during the Vietnam War.

What made the aging warbird so successful was in its ability to carry an immense amount of weapons, coupled with its ability to stay over the battlefield for extended periods of time. The Skyraider provided close-air support to ground forces, attacked enemy supply lines and even protected helicopters during rescue missions by patrolling the skies while being able to quickly strike at enemy units on the ground.

While it played a crucial role in Vietnam, the Douglas A-1 Skyraider was designed during World War II for the U.S. Navy. It arrived after World War II ended, but during the Korean War the Skyraider became the backbone of the U.S. Navy and USMC strike aircraft sorties. Its large weapons load and ten-hour flying time even surpassed the jets of the era. The Skyraider also had the distinction of making the only aerial torpedo attack of the Korean War when U.S. Navy “Dambusters,” flying from the USS Princeton, conducted a daring raid at the gates of North Korean-held Hwachon Dam.

However, by the late 1950s the Skyraiders, which were the last tail-wheeled airplane in the Navy inventory, were largely considered relics–piston-powered fighters in the age of jets–and while the fighters had performed well in Korea the Navy looked to replace them with jet aircraft.

As the United States became involved in Vietnam it was apparent that the fastest jets couldn’t always get the job done, but the Skyraider seemed perfectly suited for fighting against the guerrilla-style war that was being waged by the communist Viet-Cong forces. In 1961, U.S. Air Force instructors began to train South Vietnamese pilots at Bien Hoa Air Base with former Navy Skyraiders–but it wasn't long before those instructors took part in combat missions.

This included hunting truck convoys up and down the Ho Chi Minh Trail in Laos and Cambodia. The standard combat load during the war was four high-intensity parachute flares, eight hundred rounds of 20-millimeter ammunition, two 19-shot 2.75-inch rocket packs and a mix of four 250- and 500-pound bombs. For the pilots, it must have been an “old school” experience as there was no onboard radar, no infrared or night-vision aids.

The aircraft proved ideal for attacking enemy supply lines and providing close ground support, but as the war continued, the Skyraiders played a crucial role in search and air rescue missions.

From 1945 to 1957 Douglas Aircraft build approximately 3,180 of the Skyraider in seven basic versions, and it proved to be an extremely versatile aircraft that found uses long after it was considered a relic or even obsolete.