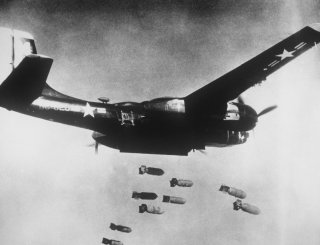 Developed during World War II era, the Douglas A-26 Invader would see action in the Vietnam War nearly twenty years later. This twin-engine attack aircraft was in essence an upgraded version of the A-20 Havoc. However, the A-26 featured more powerful engines, had a longer range and heavier armament than the A-20—one version even had 18 forward firing .50 caliber machine guns!

In 1948, the aircraft was re-designated B-26 and subsequently saw service during the Korean War (1950-53), where it was mainly used as a night intruder against North Korean supply lines. The plane was removed from service in 1958, and that could have been the end of the story.

Yet it returned to duty twice more—and in a different role for the war in Vietnam.

In 1961, the United States Air Force recalled many Invaders back into service for use in clandestine operations in South Vietnam, where they were used as tactical bombers. While the B-26K aircraft were “officially” in service with the South Vietnamese Air Force, the Invaders were actually flown by American aircrews.

Two decades of use in combat took its toll and in 1964 the aircraft were retired again, yet those that remained in use were provided with a strengthening wing strap along the bottom of the wing spars as a way to prolong service life. This proved so successful that the USAF had forty Douglas Invaders upgraded and extensively modified by On Mark Engineering in Van Nuys, California. This included a rebuilt fuselage and tail, strengthened wings, improved engines, reversible propellers and wing-tip fuel tanks among other refinements.

The improved B-26K was henceforth known as the “Counter Invader” when it returned to Southeast Asia where it was used in ground-attack missions along the Ho Chi Minh Trail. The aircraft’s forward, fixed armament consisted of eight .50 caliber machine guns in the nose and three more on each wing, while up to 8,000lbs of mixed ordnance—rocket pods, conventional drop bombs, gun pods and cannon pods—could be carried externally at multiple underwing hardpoints.

The aircraft were deployed to Southeast Asia and attached to the 606th Air Commando Squadron and were based in Phanom Air Base in Thailand. As Thailand didn’t permit the basing of bombers on its territory, in May 1966 the aircraft were reassigned the old attack designation of A26A, which brought the Invader full circle.

In addition to be being deployed against the Ho Chi Minh trail, the B-26K/A-26A Counter Invaders were flown over the panhandle of Laos—an area along the North Vietnamese border known as the Steel Tiger—in operations that were highly “black” and as result the national insignia were painted over to maintain “plausible deniability” should the aircraft be forced down.

Because North Vietnamese anti-aircraft defenses were installed along the Ho Chi Minh Trail, most of the combat missions over Laos were flown at night as it would have been too dangerous to fly the slow-moving piston-engine B-26K during the day. When possible, the aircraft were equipped with AN/PVS2 Starlight scopes for enhanced nighttime visibility.

By the summer of 1968 the night interdiction missions had been gradually taken over by the AC-130A and AC-130E gunships and the Counter Invaders were phased out of active service. Losses were heavy, with no less than twelve out of thirty that had served in Thailand lost to enemy action.

The A-26 was the last propeller-driven twin-engine bomber produced for the United States Army Air Forces, and it was one of the few wartime aircraft still in service with the post-war U.S. Air Force, but it was also the only American bomber to fly in World War II, Korea and Vietnam.