From the Drawing Board to the Firing Range: The USMC’s New Ship-Killing Missile 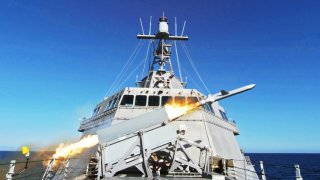 The United States Marine Corps (USMC) is moving closer to fielding a new anti-ship weapon system, mating the Navy’s potent Naval Strike Missile (NSM) to the Joint Light Tactical Vehicle (JLTV). The remotely controlled vehicle is essentially a JLTV stripped to its engine and drivetrain, and sports two containerized missiles atop the truck’s chassis. Each missile’s range is more than 100 miles, and each NSM carries a 500-pound warhead and significantly augments the Navy and Marine Corps’ anti-ship capabilities.

“This exercise gave us an opportunity to not only measure but also validate the concepts for [the USMC’] anti-ship capability, which is one of the most important avenues of the Commandant’s Force Design 2030,” Lieutenant Col. Ryan Collins, combat integration office for artillery and fires at Marine Corps Combat Development Directorate, Combat Development and Integration explained in the Marine Corps statement concerning the exercise. “I think the successful launches of the missile will help us clarify the path forward as we move to fulfill the Commandant’s 2030 vision, and giving the Marine Corps a transformative anti-ship capability.”

Aside from pulling the trigger, the exercise validated the NMESIS’s interoperability with the Navy and Air Force. “This week was very successful,” a long-range fires program manager explained. “In addition to the two live-fire shots that hit the target, we also successfully deployed the system aboard the Marine Corps’ primary transport systems, the C130 and LCAC.”

The Marine Corps statement concerning the exercise noted that while U.S. Marines maneuvered the NMESIS both on and off Air Force vehicles and on the ground, NMESIS program engineers managed the platform’s fire control system and fired both NSM missiles as the vehicle is still in a testing phase.

The Marine Corps’ NMESIS fits within the Corp’s Force 2030 redesign, in which small teams of highly mobile, amphibious, and decentralized groups of Marines are expected to prowl throughout the western Pacific using platforms like the highly anticipated Light Amphibious Warship.

Marines are tasked with being a thorn in the Chinese Navy’s side, denying them the use of the remote specks of land that dot the Pacific via new weapon systems like the NMESIS, which the Marine Corps believes will allow for a powerful land-based anti-ship capability.