This Drone Could Make the U.S. Navy's Littoral Combat Ship Even Better 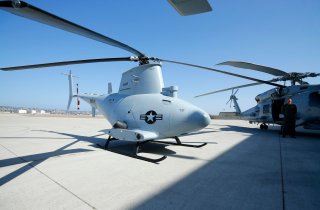 The U.S. Navy is taking drone operations from its Littoral Combat Ship (LCS) to a new level of security, automation, precision and combat effectiveness by strengthening the technical systems used for its helicopter-like, deck-launched drone called the Fire Scout.

The service is primarily hardening the networks which enable the vertical-take-off drone to operate more safely from the back of an LCS, and perform its reconnaissance missions with less risk of being “jammed” or derailed. The network and flight-path hardening, includes both cybersecurity upgrades and technical adjustments to the drone, focused on improving what’s called Imaged Based Navigation for Vertical Take-off and Landing Tactical Unmanned Aerial Vehicle Shipboard Landing program.

Improved levels of flight automation, coupled with networked hardening, enable the drone to land more autonomously on the back of an LCS and better withstand windy, turbulent maritime conditions. Instead of needing every movement coordinated by humans performing command and control, ship operators can simply observe and supervise the glide slope, flight path and secure take-off-and-landing of the drone. Even in rough seas, on board sensors, increasingly fortified by AI-enabled systems, can account for a number of otherwise disparate data streams simultaneously. This ensures a safer landing and naturally greatly strengthens mission effectiveness.

The LCS’ Fire Scout drone is an indispensable part of the ship’s surface, countermine and anti-submarine warfare missions; it is equipped with advanced mine-hunting sensors, aerial surface scanners and target-locating EO/IR cameras. The networking is intended to expand not just to ship command and control but other nodes involved in maritime warfare scenarios such as other surface ships, aircraft or even small unmanned surface vehicles.

The Navy is increasingly working on connecting unmanned surface, air and undersea nodes in real-time, therefore improving automation and hardening networks can help enable coordinate attack and give advanced algorithms greater changes for success. The work with Northrop Grumman’s Fire Scout, also supported through a Navy contract with a small Massachusetts firm called Scientific Systems, is geared toward the broader service goal of increasing warzone autonomy and unmanned systems development.

The Fire Scout has been both deploying and conducting training missions on board Navy Littoral Combat Ships for several years. The Navy is also integrating a new maritime search radar to its larger Fire Scout variant—the MQ-8C—in order to extend its ISR capacity and provide better targeting support to nearby offensive operations. The existing electro-optical and infrared cameras on the Fire Scout have a range of six-to-ten miles, whereas the new maritime radar can find targets at ranges out to 80 nautical miles, service officials explained.

Given that the Navy’s Littoral Combat Ship is engineered to use its shallow draft, speed and maneuverability to conduct combat operations in littoral waters near enemy coastlines, having an improved technological capacity to find and detect enemy mines and submarines near the surface expands its mission envelope and provides needed protection for offensive ship operations.

The 31-foot long Fire Scout can fly at airspeeds up to 110 knots and reach altitudes of 20,000 feet; the aircraft weighs 3,150 pounds at its maximum take-off weight and is powered by one Rolls-Royce heavy fuel turboshaft engine, Navy officials said. The Fire Scout has an electro-optical/ infrared sensor called Bright Star 2, which has laser range-finding and laser designation, Navy developers said. The MQ-8B Fire Scout can stay up on a mission for up to five hours and also uses Automatic Identification System, or AIS, technology to help locate and identify ships.