Drone Explosion: The Navy Is Going Big on Unmanned Ships 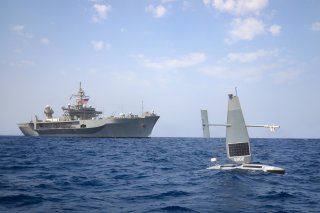 The chief of naval operations' newly released 2022 Navigation Plan calls for a large “hybrid fleet” consisting of a mixture of large surface ships, submarines, drones, and unmanned platforms of all kinds. Of greatest significance, perhaps, is the Navigation Plan’s call for a 500-ship fleet—combining manned and unmanned vessels. This is by no means surprising given the pace and scope of Chinese naval expansion.

The use of the term “hybrid” by Chief of Naval Operations Adm. Michael Gilday seems to define the plan, given that it describes the Navy’s growing blend of manned and unmanned ships, which forms an increasingly networked fleet capable of executing dispersed, disaggregated missions across a vast operational envelope.

“The Navy must become a hybrid fleet. Manned, multi-mission platforms will remain at the core of our future fleet, but augmented with new platforms and new capabilities. We will add to our current fleet a host of manned, unmanned and optionally-manned platforms operating under, on, and above the seas,” Gilday writes in the plan.

Gilday’s text is specific on both numbers and a timeline, as it calls for a combined total of 500 manned and unmanned ships of all sizes and configurations capable of conducting a wide mixture of multi-domain operations.

“In the 2040s and beyond, we envision this hybrid fleet to require more than 350 manned ships, about 150 large unmanned surface and subsurface platforms, and approximately 3,000 aircraft,” the plan notes. “As the security environment evolves, we will continue to iteratively refine our capacity goals through force structure assessments, analysis, war-gaming, and experimentation.”

This unmanned expansion, also made possible by rapid advances in networking, information processing, and autonomy, extends well into the undersea realm through a number of current Navy efforts to fast-track drones of all sizes, including small, mine-hunting, semi-autonomous drones, as well as submarine-like drones such as the Large Diameter Unmanned Undersea Vehicle. Emerging networking technologies increasingly enable multi-domain communications, opening up new opportunities for undersea platforms to launch drones capable of approaching the surface and connecting in real-time with surface and air platforms. With these kinds of paradigm-changing tactical possibilities, unmanned systems can increasingly absorb high-risk missions while manned vessels armed with long-range fires conduct command and control at standoff ranges.