Drone Kills Drone: How an MQ-9 Killed Another Drone (And Made History) 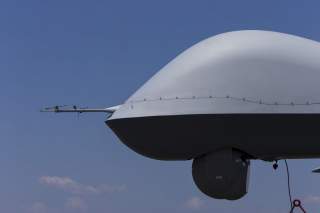 The MQ-9 baseline system carries the Multi-Spectral Targeting System, which has a robust suite of visual sensors for targeting.

The MQ-9 has made its first air-to-air killby shooting down another drone using a heat-seeking missile in a test.

The test was carried out in November 2017, Col. Julian Cheater, commander of the 432nd Wing at Creech Air Force Base, Nevada, told Military.com.

“Something that’s unclassified but not well known, we recently in November … launched an air-to-air missile against a maneuvering target that scored a direct hit. It was an MQ-9 versus a drone with a heat-seeking air-to-air missile, and it was direct hit … during a test,” he said.

“We develop those tactics, techniques and procedures to make us survivable in those types of environments and, if we do this correctly, we can survive against some serious threats against normal air players out there,” Cheater pointed out. “We will go participate in ‘Red Flag’ exercises, and we will drop weapons in testing environments to make sure that we can fight against those type of adversaries.”

He also explained that this effort is key to preparing for the next big aerial war against near-peer threats such as Russia or China, who are advancing their skill sets not only in unmanned aerial vehicles but also in hypersonics, electronic warfare, lasers and missile testing.

The MQ-9 baseline system carries the Multi-Spectral Targeting System, which has a robust suite of visual sensors for targeting. The MTS-B integrates an infrared sensor, color/monochrome daylight TV camera, image-intensified TV camera, laser range finder /designator, and laser illuminator. The full-motion video from each of the imaging sensors can be viewed as separate video streams or fused.

“We specialize in urban settings,” Cheater said. “That is an important capability that very few aircraft and aircrews have.”

However last year’s test shows how the U.S. Air Force (USAF) is refocusing and thinking about the role the Reaper will play in future Air Warfare.