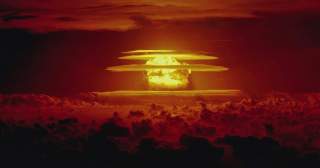 It just takes one nuclear weapon to start Armageddon.

Geoff Wilson is a Research Associate at Ploughshares Fund, a global security foundation that has supported War Is Boring in the past. Will Saetren is the author of Ghosts of the Cold War: Rethinking the Need for a New Cruise Missile, and an alumnus of the Roger L. Hale Fellowship at Ploughshares Fund.