Duterte Is Shaking The U.S.-Philippines Alliance To Its Core 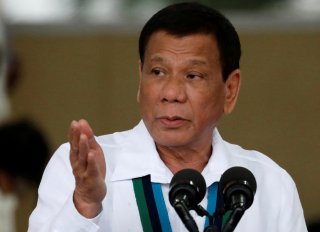 Here's What You Need To Remember: Duterte and his lieutenants, then, struck a care-not attitude toward U.S. access to the country despite the benefits working with the region’s foremost military confers. They have sought to even the balance of bargaining power, showing that Manila too can walk away from the table and be pleased with the outcome.

Seldom are Philippine affairs the stuff of clickbait here in North America. Dominating headlines this week were the Wuhan coronavirus, the release of the Pentagon’s fiscal 2021 defense budget proposal, impeachment and acquittal, and on and on. The apparent demise of an obscure treaty between the Philippine Islands and the United States barely registered in the conversation about foreign and defense affairs.

Too bad. Terminating the U.S.-Philippine Visiting Forces Agreement (VFA) could ripple throughout Southeast Asia to the detriment of not just the Philippines’ defense but U.S. maritime strategy toward China.

Sometimes, it seems, a minor diplomatic fracas carries major repercussions. Last Monday President Rodrigo Duterte’s administration gave notice that it intends to abrogate the Visiting Forces Agreement, which regulates such matters as criminal jurisdiction over American military personnel and movement of ships and aircraft within sovereign Philippine territory. Duterte was incensed when the U.S. Embassy canceled a visa for Senator Ronald dela Rosa, a former national police chief, over alleged extrajudicial killing of drug traffickers. Without predictable procedures governing military access to the Philippines, the Pentagon will be loath to deploy forces to the country.

That’s a big deal. U.S. maritime strategy envisions threatening to blockade China’s navy and merchant fleet within Asia’s “first island chain” in order to deter Chinese misbehavior. The Philippine archipelago occupies prime real estate, comprising the eastern rim of the South China Sea as well as the southeasterly arc of the first island chain. If U.S. forces cannot operate from Philippine bases, it’s hard to see how they can mount a standing presence in the South China Sea or along the island chain. Feuding between Manila and Washington might shatter a link in the chain—and grant Chinese shipping freedom of movement between the China seas and the Western Pacific.

Fail. No blockade—in effect a distended defense perimeter—succeeds when punctured along a lengthy segment of the line. Deterrence vis-à-vis Beijing would collapse along with the defensive line’s integrity.

First the operational implications of canceling the VFA, then the politics. Admiral J. C. Wylie observes that the object of military strategy is control. That could mean direct control of an antagonist by armed force; it could mean control of physical space. Either way the victor is the contender that sustains superior firepower at decisive places on the map or nautical chart for long enough to accomplish its goals. The “man on the scene with a gun,” says Wylie, is the arbiter of control. That being the case, “the strategist . . . must establish, or must present as an inevitable prospect, a man on the scene with a gun.”

That is a simple yet evocative metaphor for military strategy. Military forces can come and go, staging an intermittent presence. Men on the scene bearing guns might prevail in every tactical engagement that confronts them. But if they have to go elsewhere in search of places to rest, replenish, and refit, they cede physical space back to even a defeated foe. That was one of the chief defects in U.S. strategy for fighting the Vietnam War. Ground forces could beat the Vietcong or North Vietnamese Army every time they met in battle. Yet U.S. and South Vietnamese forces seldom left garrisons to control ground thus liberated.

They came, they saw, they conquered . . . and then they left. And communist forces returned. Forfeiting the fruits of success is no way to win a war. You have to go and stay to win in Wylie’s durable sense.

U.S. naval forces could make their weight felt in the South China Sea without access to Philippine bases, but it would be hard to keep up the ‘round-the-clock presence enforcing a blockade demands. Japan, which plays host to the U.S. Seventh Fleet, lies far to the north. Singapore, another ally, occupies the southern juncture between the South China Sea and Indian Ocean; but Singaporean leaders would likely blanch at the prospect of supporting major U.S. naval operations against China, the regional Big Brother. Australia lies fairly nearby to the south but as yet has rebuffed entreaties to host heavy U.S. forces. The U.S. Navy operates a fleet of tankers, ammunition ships, and stores ships. But the combat-logistics fleet has gotten lean in numbers over the years and is stretched among many theaters. Logistics will pose severe problems absent bases near potential battlegrounds.

Admiral Wylie would be skeptical of the U.S. military’s capacity to seal the first island chain or help defend offshore Philippine waters without access to Philippine soil. And he would be right to voice doubts.

Now, it’s important to note that the VFA remains in force for the time being. The agreement’s terms stipulate that either party can withdraw after giving 180 days’ notice. That leaves Manila and Washington an interlude to sort out their differences. In fact, it’s possible to interpret this week’s events as part of a dealmaking process between two dealmakers-in-chief: Rodrigo Duterte and Donald Trump. In the mid-1980s a pair of negotiations scholars, William Ury and Richard Smoke, postulated that perception is king in times of crisis. The “anatomy of a crisis,” maintained Ury and Smoke, engages and amplifies perceptions that the stakes are high, options are narrowing, time is short, and uncertainty predominates. Crisis intensifies the pressure to concede.

To get his way against another veteran dealmaker, President Duterte may be trying to generate an artificial atmosphere of crisis. The stakes, he believes, are high for the United States; options are few for the Pentagon; time is short now that he has put the two governments on a 180-day deadline to resolve their quarrel; and the Philippine chief executive is a master of uncertainty. He goes out of his way to be unpredictable. For his part, President Trump, no stranger to being unpredictable, has indicated that he feels little pressure to strike a bargain favorable to Duterte. In the Oval Office, asked about the Philippines’ withdrawal from the VFA, Trump replied: “That’s fine—we’ll save a lot of money . . . . I really don’t mind if they would like to do that.” He has credibility, having questioned the value of alliances from NATO to South Korea.

These maneuvers will be instantly familiar to negotiations specialists. Savvy negotiators know that cultivating an attractive alternative to a negotiated settlement is the way to amass bargaining clout. Not caring is a powerful thing. If you convince your interlocutor you’re content to walk away from the table without a deal, you wield serious leverage. Better still if you persuade your interlocutor you prefer to walk away. If effect you’ve signaled, in Ury and Smoke’s parlance, that the stakes don’t matter, your options are many and beguiling, and deadlines and uncertainty are of little consequence. You feel little sense of crisis, in other words, and thus see little need to yield to the other party’s demands.

You can good deal provided your interlocutor wants one.

Duterte has likewise cultivated an air of indifference toward an  agreement. Since taking office in 2016 he has repeatedly telegraphed his willingness to bandwagon with China and Russia while loosening defense relations with America. A Philippine president who cares little about the U.S.-Philippine alliance and has no fear of Chinese predations enjoys the liberty to take an uncompromising stance in talks with Washington. Duterte, moreover, boasts that his country can now provide for its own defense rather than rely on outsiders. It no longer needs American protection. Proclaims presidential spokesman Salvador Panelo: “It is about time that we strengthen our defense capabilities.” Should anyone menace the Philippine Islands, “we will rise by our own resources and valiantly defend our motherland the way our forefathers did during their time.”

Duterte and his lieutenants, then, struck a care-not attitude toward U.S. access to the country despite the benefits working with the region’s foremost military confers. They have sought to even the balance of bargaining power, showing that Manila too can walk away from the table and be pleased with the outcome. What comes next? Well, the stakes are high for both allies, whether they admit it or not. (One hopes the presidents don’t believe their own hype.) Nor does either ally have especially good options. The Philippines is the sole possessor of the real estate American strategy prizes, while even a Duterte would recoil at actually cozying up to China—the predator intent on purloining Philippine islands, atolls, and nautical rights. Nor, despite Panelo’s brave talk, does Manila have the slightest chance of defending itself out of its own resources. It is Bambi to China’s Godzilla.

In short, the Philippine Islands and the United States need each other. That leaves the 180-day deadline to goad the parties to hammer out a deal. Chances are the next six months will see the Duterte and Trump administrations jockey to bring pressure on each other while acting noncommittal and enhancing such options as they have in case the dickering falls through. Then, at the eleventh hour, they will do the obvious. They will reach a bargain that more or less preserves the existing arrangement while furnishing face-saving concessions to both presidents. It will be messy and tedious. But that’s power politics.