The E-2D Hawkeye Is Ready for Twenty-First Century Warfare 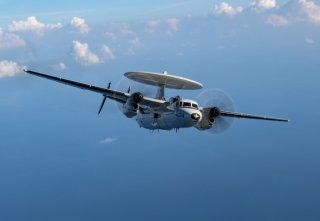 On October 21, 1960, during the height of the Cold War, a U.S. Navy ship-launched Hawkeye airborne early warning aircraft took its first flight. Decades later, in the face of new global challenges, a massively upgraded Hawkeye continues to help keep the United States secure.

The modern variant of the E-2D Advanced Hawkeye is tasked with protecting carrier strike groups. The most cutting-edge variants of the E-2D are equipped with next-generation electronics, radar, command and control, and computing systems that make the aircraft almost an entirely different system from what it was during the Cold War.  Interestingly, perhaps much like the 1950s-era B-52 bomber, the E-2D’s airframes have remained functional and structurally sound, and with some maintenance and reinforcement can fly for years into the future. With a new generation of sensing, data processing, and radar sensitivity, the E-2D has been able to detect threats from hundreds of miles away by operating as an aerial node for surface warships. While the aircraft operates as a line-of-sight detection platform, it has a view unavailable to surface ships.

The E-2D is a twin-engine aircraft that is typically launched from Nimitz-class aircraft carriers, which are the largest warships in the world. The plane’s radar system utilizes a twenty-four-foot roto-dome that allows for continuous scanning while its five-person crew is protected by a glass tactical cockpit. Navy developers explained that through a data link the pilot can transmit information detected and tracked by the aircraft back to the carrier strike group.

In 2020, according to a Navy report, the E-2D Hawkeye became operational as an aerial refueling capability engineered for all-weather early warning and command and control missions, allowing the crew to remain airborne for longer missions and optimize various fuel system enhancements.

“The ‘eyes of the fleet’ will see further and wider, equipping the warfighter for ever-evolving threats,” the Navy report said, referring to the upgraded Hawkeye.

These upgrades helped advance the trajectory for what could be referred to as an “evolution” of the Hawkeye as its transitions from its role as an early warning aircraft to encompass a much wider range of operations to include additional targeting, multi-domain data sharing, and command and control functions.