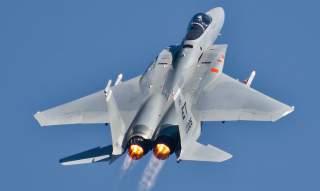 The U.S. Air Force is deferring planned upgrades to the Eagle—such as the addition of new electronic warfare systems—until it decides if it wants to keep the increasingly aged airframe. Indeed, as the Air Force has discovered, the F-15C will need an extensive airframe overhaul and structural modifications to remain in service past the mid-2020s. In all likelihood, given that the Congress has refused to allow the service to retire the A-10 Warthog, the Air Force will have little choice but to divest itself of the F-15C to free up funding for more pressing projects. The F-15E Strike Eagle interdictor aircraft, though, will remain in service indefinitely.

However, for the time being, the F-15C makes up about half of the Air Force’s air superiority fleet because the service received less than half of the Lockheed Martin F-22A Raptors that it required. Eventually, the Air Force hopes to develop a new Penetrating Counter Air platform to supersede both the F-15C and the F-22 in the 2030s as Russia and China increasingly field new fifth generation fighters such as the Sukhoi Su-57 PAK-FA.

The Su-57—especially once it receives its new second stage engines—will be a handful for any fourth generation fighter given its combination of speed, maneuverability, stealth and electronic warfare capability. However, the U.S. Air Force does have a plan to defeat enemy stealth aircraft and a counter is already in the works.

The answer lies in the long-wave infrared spectrum, which the current generation of stealth aircraft are not designed to suppress. Nor does any countermeasure currently exist to suppress detection at long range by a long-wave infrared sensor that could be retrofitted to existing airframes. It is likely that engineers could in the future devise measures to hide from a long wave infrared sensor, but the airframe would likely have to be designed from the outset to incorporate those technologies.

Close in at the merge, if the Su-57s survive the initial AMRAAM volley, the surviving F-15Cs would be at somewhat of disadvantage against the extraordinarily maneuverable Russian fighters. However, the F-15C community has a lot of practice flying against the extremely maneuverable F-22s, and while they are disadvantaged, Eagle pilots do win dogfights against the Raptor on some occasions. Moreover, with the addition of the Joint Helmet Mounted Cueing System and the Raytheon AIM-9X Sidewinder, the F-15C has excellent high off boresight capability—the ability for the pilot to shoot in the direction his head is pointed—as does the Su-57, which more often than not results in a mutual kill as numerous training exercises have shown.

At the end of the day, if it were not for the maintenance and sustainment costs coupled with the need to pay from structural repairs, it would likely be worth it to keep the F-15C in service. However, given the age of the airframe and the continually evolving threat, it is more prudent for the Air Force to invest in next generation capabilities such as the PCA—especially since Congress will not let the service rid itself of the A-10. Something has to give and it looks like the F-15C’s time has come.