Eagles Away: Inside Israel's Plan to Replace Its Aging F-15 Fighter Jets 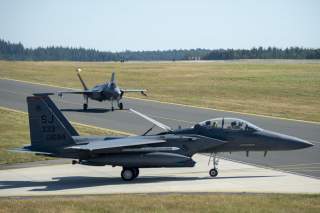 As reported by Globes former senior IAF officers told that the service future squadrons cannot rely on only one type of combat plane (the F-35), hence the need for new F-15s.

According to Globes, Israel is likely to place an order with Boeing for a squadron of F-15s.

Israeli Air Force (IAF) in fact would like to replace its fleet of legacy F-15s with a more advanced variant of the fighter. The new Eagles, besides having an advanced active electronically scanned array (AESA) radar, would feature advanced attack capabilities and a crew of two members.

Globes also claims that the aircraft will be more advanced than those sold to Saudi Arabia and Qatar.

Noteworthy even if the first F-15 performed its maiden flight almost 45 years ago, the fighter has been constantly upgraded and the new Eagles will be very different aircraft than those received by Israel towards the end of the 1970s.

As reported by Globes former senior IAF officers told that the service future squadrons cannot rely on only one type of combat plane (the F-35), hence the need for new F-15s.

Actually IAF needs enough aircraft to equip two squadrons and after cabinet approval to procure new airplanes is obtained a decision will be made on whether buying more F-35s or F-15s.

Moreover IAF is searching for a new transportation helicopter to replace its fleet of ageing CH-53s. For this reason Israel Ministry of Defense asked the US Department of Defense for information about CH-53K and CH-47F helicopters: currently the difference in price between Lockheed Martin’s helicopter and that of Boeing is estimated at one third, but the fate of the purchase (as that for the possible F-15s purchase) will depend on U.S. government attitude which could try to influence the volume and price of both deals.