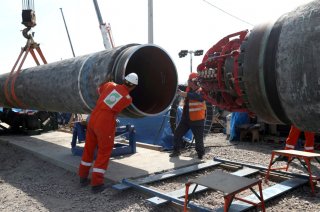 The United States and Germany recently reached an agreement that allows the project completion of the Nord Stream 2 pipeline, accompanied by a pledge that the two countries will push back against Russia if gas supplies are used as political instruments against Eastern Europe and in particular, Ukraine. This was met with skepticism from most of the Eastern European nations. A Polish diplomat compared the deal with the Molotov-Ribbentrop Pact of 1939. However, while it is true that Russia can use gas as political leverage, there will be limits to its ability to do so. Moreover, Eastern Europe will have to learn to live with this project. This concession should be viewed as part of a bigger geopolitical process in which the United States and Germany try to avoid closing all doors to Russia and pushing it into China’s embrace.

Global market trends have once again shifted the balance of power in the energy domain away from consumers and towards suppliers, making this pipeline a necessity. Eastern European concerns that Russia will use gas supplies as political leverage are not entirely unfounded. Indeed, even before the advent of Nord Stream 2, Russia has been delivering the minimum amount of gas stipulated by contracts without putting additional gas on the market so it could ensure a high price and make the case for the necessity of Nord Stream 2. While European energy dependency on Russia gives Moscow the ability to use it as a bargaining chip, Russia will be careful when and how frequently it will employ that tactic.

Gas prices are at their highest in three years, and the approval of Nord Stream 2 is the first good news for Russian president Vladimir Putin in relations with the West in a while. Putin wants to ride this wave as long as possible and collect the revenues badly needed for the Russian economy as the regime deals with the COVID-19 pandemic and the search for a long-term successor to Putin. Putin does not want to do anything to jeopardize that except in the case of a major crisis with the West. The Ukrainians are concerned that with the completion of Nord Stream 2, Putin’s Russia will launch a full-scale invasion of Ukraine. This fear is overblown, as Russia, does not want to swallow Ukraine but to ensure that it does not drift towards the West. Russia is primarily focused on preventing Ukraine from joining NATO, so it can have a security buffer on its geographically vulnerable Western borders. This is something that Russia has already achieved.

President Joe Biden’s concession to Germany has been driven not by the Russian factor but by the Chinese factor. The obsession with Russia in the U.S. establishment in the last few years clouds the essential reality of history: Russia can be an occasional irritant, but China is the systemic rival of the United States and the West. The approval of Nord Stream 2 was Biden’s message to Berlin saying, ‘We will give you a pass on dealings with Moscow, but we will not do the same in case of your dealings with Beijing.’ Indeed, while Berlin is still evasive about aligning fully with Washington on Beijing, NATO recently qualified China as a “security challenge” for the first time. Neither Germany nor the rest of Europe can continue to rely on U.S. security guarantees if they keep opening the door to China. Nord Stream 2 was Biden’s goodwill gesture to Germany to revitalize the Transatlantic partnership and to make Berlin more willing to help the United States contain China in the future.

In agreeing to the pipeline, Biden gave a gift to Russia to ensure that Russia does not make a full tilt towards China. Understandably this angered Eastern Europeans. As Melvyn B. Krauss recently wrote, “Abrupt strategic policy shifts are rarely understood at their outset. When U.S. President Richard Nixon inaugurated relations with communist China fifty years ago, he set off a firestorm among America’s allies, with Japan objecting even more strongly than the Estonians, Latvians, Lithuanians, and Poles are now.” While Eastern European reservations are understandable, the question must be asked will a Russia alienated by the West and pushed into an alliance with China be less nationalist, less revanchist and less dangerous towards its neighbors? The answer is no.

The West-Russia rapprochement will not happen overnight, for among other reasons, because of the weariness of Eastern Europe towards this move, and because relations with the United States are full of open questions. However, approving Nord Stream 2 was a way of not burning all the bridges with Russia and creating a window of opportunity for rapprochement in the future to ensure that Russia does not permanently end up in China’s embrace. However, this will take a long time, patience, and strategic thinking.  A goodwill gesture on Nord Stream 2 is just one small piece of the puzzle. Eastern Europe will not be happy, but that’s the way it is.

Vuk Vuksanovic is a Ph.D. researcher in international relations at the London School of Economics and Political Science (LSE), an associate of LSE IDEAS, LSE’s foreign policy think tank, and a researcher at the Belgrade Centre for Security Policy (BCSP).