Easy Target: How the United States Can Stop Foreign Powers From Attacking Its Elections 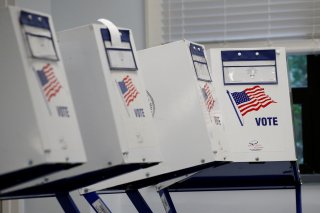 State election officials are sounding what is becoming an increasingly dire warning about the integrity of the voting process heading into the 2020 election, pleading for federal funds to help secure next year’s balloting against cyberattacks.

At a public forum on Thursday, the top election officials from Connecticut and Louisiana said underfunded election systems in their states are vulnerable to hacking from outside agents who might want to create mischief, or even seek to change the outcome of the vote.

“We all have the same expectation, which is a secure environment for our elections, and that every vote is accurately counted and everybody gets to participate who wishes to participate,” Kyle Ardoin, Louisiana’s secretary of state, said at a forum hosted by the Election Assistance Commission.

State officials, Ardoin said are “constantly asking for additional resources to fend off cybersecurity issues, to update equipment, and to do what is necessary to secure our elections and offer our people the right to vote.”

Denise Merrill, the secretary of state for Connecticut, underscored the threat to elections there, pleading for additional federal funding to secure the vote.

“This is one of the fundamental operations of government. You’re not going to privatize elections, and so it’s time we put some dollars behind what’s happening,” Merrill told the forum sponsored by the commission, an independent agency of the United States government, which serves as a national clearinghouse and resource of information on administering elections.

“I do think some funding needs to come from the federal level,” Merrill said.

Their pleas came just two days after President Donald Trump tweeted that he was open to shoring up election security — but only if Congress agreed to put voter ID laws supported by Republicans into place. Such laws historically have been used to block access to the ballot box to people of color, students, and other groups that tend to lean Democratic.

“No debate on Election Security should go forward without first agreeing that Voter ID (Identification) must play a very strong part in any final agreement. Without Voter ID, it is all so meaningless!” Trump tweeted late Tuesday.

There is little debate surrounding the need to prevent hostile foreign countries like Russia from hacking into outdated, paperless ballot boxes during the 2020 election. Such attacks occurred during the 2016 election and it will happen again in 2020, according to former special counsel Robert Mueller’s two-year investigation and the country’s entire intelligence apparatus.

Although election security continues to be the focus of concern by some officials on both sides of the aisle in the aftermath of efforts by Russia to hack into U.S. voting systems, steps taken to try to fix the problem have been modest, at best.

On Thursday, a federal judge, citing security concerns, ordered election officials in Abrams’ home state to stop using paperless touch screen voting machines ahead of the 2020 election. In her 153-page ruling, U.S. District Judge Amy Totenberg said that hand-marked paper ballots must be used if a new system isn’t in place by next year’s presidential primaries.

Election integrity advocates had argued in a 2017 lawsuit that paperless touch screen voting machines in use since 2002 were vulnerable to hacking and could not be audited.

Meanwhile, Democrats are also concerned about the effects of gerrymandering and other efforts to discourage voter participation — moves that disproportionately impact their voters.

Even helping shore up voting systems from hacking can’t protect the ballot from intentional manipulation of the vote, with Republicans doubling down on gerrymandering and other untoward actions that have helped them eke out wins in close elections.

Democrats like Abrams say they believe that, by allowing as many eligible voters to cast a ballot as possible, they will win elections. Republicans, meanwhile, have been imposing burdensome laws and regulations that are designed to stop likely Democratic voters, including college students and African and Latinx Americans, from casting ballots.

It would cost an estimated $900 million to replace electronic voter machines throughout the country and protect America’s elections from online attacks. Russia, which meddled in the 2016 election to swing the results in Trump’s favor, targeted election systems in all 50 states during the 2016 election, according to a Senate Intelligence Committee report.

However, Trump has indicated that he would be willing to accept help from foreign adversaries to win the 2020 presidential election and last month Senate Majority Leader Mitch McConnell blocked an election security bill that would have helped stop the hacking threat.

A number of reports and studies have confirmed that documented cases of voter fraud are astronomically rare. A Washington Post investigation found that out of over 1 billion ballots cast, there were only 31 credible cases of impersonation fraud between 2000 and 2014.

Republicans who insist that voter fraud, rather than election security, is the real issue go to great lengths to prove it, such as establishing a dubious and now disbanded voter fraud commission. That is because voter fraud is their excuse for imposing their voter suppression laws that place barriers on likely Democratic voters.

A number of Republican-controlled states began imposing voter ID laws in 2012 based on model legislation crafted by a secretive and powerful far-right organization, the American Legislative Exchange Council (ALEC). Those laws disproportionately disenfranchise voters from minority communities, studies have shown.

North Dakota also imposed voter ID laws after former Sen. Heidi Heitkamp’s (D-ND) election upset in 2012. The state’s law required voters to present IDs with a residential mailing address when voting. Because many tribal members do not have a formal mailing addresses on reservations and instead rely on P.O. boxes, the law effectively stripped many Native Americans of their voting rights.

This article originally appeared on Think Progress on August 16, 2019.

Danielle McLean is an investigative reporter at Think Progress.

Stephanie Griffith is a senior editor at Think Progress.