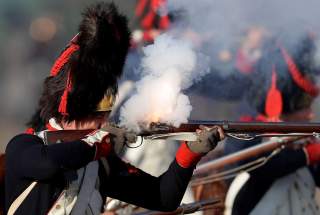 Napoleon’s innovative concepts for the equipment and employment of heavy cavalry also diffused, unevenly, across Europe. The Austrian cuirassiers, who were the best and largest force of armored cavalry in Europe until that time, were cut by a third in 1802. However, the Austrians also began brigading together their remaining heavy cavalry in 1805, in imitation of Napoleon’s heavy cavalry reserve. The Russians formed heavy cavalry brigades in 1807, and the Prussians in 1813. Armor also became steadily more common on the battlefield during the Napoleonic era, with Russia re-issuing heavy-cavalry armor in 1812 (having withdrawn them in 1801) and Prussia re-adopting armor in 1814–15.

Perhaps appropriately, the history of Napoleon’s cuirassiers, who were known as hommes de fer, is ironic. In the least charitable interpretation, Napoleon’s cuirassiers are a prime example of “buggy whip” misinnovation, in which an organization continues to innovate along an established technology arc after that technology is no longer useful. After all, Napoleon’s armored cavalry force reached its numeric peak in 1810, shortly after its last decisive action at Wagram in 1809. Much like post-WWII airborne forces, they survived off imperial favor and organizational inertia long after they ceased to be useful. At the same time, even misinnovation is a form of innovation, and Napoleon should receive more credit for his innovative use of cavalry. It won him many battles, and he was far from the last commander to argue that cavalry remained useful in the face of increasingly effective artillery and small arms. Moreover, it represented the application of tried-and-true ancient technology to achieve novel requirements—that is, delivering the shock tactics newly available to post-Revolutionary France after it mobilized the full resources of the French state. The so-called “revolutionary military change” of the Napoleonic era was not a steady march towards recognizable military modernity. As Napoleon knew well, ancient principles and technology were still perfectly useful on his “early modern” battlefield.

Captain T.S. Allen is a military intelligence officer in the United States Army who has served in Afghanistan and Korea. He is writing a book on nineteenth century heavy cavalry armor. Follow him on Twitter @TS_Allen. The views presented here are those of the writer and do not represent the views of the U.S. Department of Defense or its components. This first appeared in January 2020.