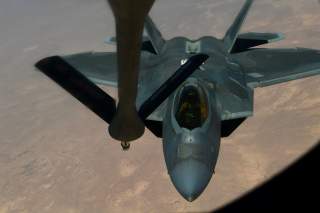 Elon Musk recently stunned a large gathering of Air Force officers at an annual Air Force Association (AFA) symposium by telling them that “the fighter jet era has passed” and confidently predicting that “locally autonomous drone warfare is where the future will be.” Scores of current and retired fighter pilots in attendance were gobsmacked. It’s one thing for a Musk or a Jeff Bezos to talk about autonomy to a room packed with shareholders looking to maximize productivity and profit. It’s another thing entirely when the shareholders happen to also be the workers on the frontline and their jobs are at stake. Welcome to the harsh world of speaking truth to a military that does not want to hear it.

In the days since Musk’s remarks, several articles have been written, mostly by former fighter pilots, proclaiming that “air superiority” will depend upon manned fighters like the F-35 for decades to come. Two major arguments have been put forth: 1) human situational awareness and mental processing power will remain necessary to win aerial close combat or “dogfights” for the foreseeable future; and 2) autonomous aircraft are inherently unreliable and accident prone. These critiques are, at best, tenuous. More importantly, however, they obscure other trends in air warfare that support Musk’s core contention that the days of the manned fighter are numbered.

An opening question that has been largely ignored thus far is whether we still in fact need dedicated aircraft to gain air superiority, which at its core is about having the freedom to attack through the air domain while denying the same to one’s adversary. Since its combat debut in 1999 in the Kosovo war, for example, stealthy B-2 bombers have successfully conducted scores of precision strike sorties—none of which depended upon a close fighter escort. One can certainly imagine that in the future, stealthy, long-range strike aircraft like the B-21 could secure the freedom to attack through low observability, electronic attack, and self-protection made possible by large sensor apertures and very long range, air-to-air missiles (AAMs) that could detect and neutralize enemy fighters from a safe distance. Similarly, borrowing a page from China and Russia’s “A2/AD” playbook, modern integrated air defense systems could defend US territory and forward bases against enemy air strikes, and long-range missiles could suppress enemy air bases. For the sake of argument, however, let’s stipulate that dedicated air superiority aircraft will remain necessary and the relevant question is only whether they should be manned or unmanned in the future.

The assertion that human situational awareness and thinking are critical for “dogfighting” is both highly debatable and, more importantly, largely irrelevant. Equipping unmanned aircraft with sensors to provide 360-degree situational awareness in multiple frequency bands simultaneously is doable today—and would be far superior to two human eyes limited to the visual spectrum and can only look in one direction at a time. Indeed, this is precisely why fifth-generation manned aircraft like the F-35 feature myriad sensor systems along with automated data processing to improve the pilot’s situational awareness. It defies logic that a pilot could somehow take better advantage of that sensor data, which needs to be processed and displayed for human consumption (which takes time, reduces fidelity, and quickly outstrips human cognitive capacity) than a high-speed computer that can ingest sensor data directly, process and analyze it, and act upon it in milliseconds. While contemporary unmanned aircraft do not yet have the requisite autonomy to engage in close-in aerial combat, that is a skill well-suited to the application of artificial intelligence (AI). As a pattern recognition task with actions and reactions bounded by the laws of physics, dogfighting is amenable to machine-learning approaches. In fact, preliminary research, using large data sets gleaned from pilot vs pilot combat simulations, is ongoing at the Air Force Research Laboratory.

Arguments that unmanned aircraft can’t dogfight often skip over the inconvenient fact that they could also be built differently and more cheaply than manned ones. The weight, cost, and power requirements of human support systems (e.g., cockpit, canopy, ejection seat, oxygen supply, air conditioning, and flight controls and instruments) are substantial. Without a canopy and cockpit, it would also be easier to reduce an unmanned aircraft’s radar cross section and other signatures. More importantly, without a pilot to worry about, it would be possible to double maneuverability from an upper bound of roughly 8–10Gs, which is constrained by human physiology, to 15–20Gs, which is limited by currently available propulsion options and materials. Imagine a future unmanned aircraft with 360-degree situational awareness; AI-enabled, “ace level” tactical proficiency; and 15G agility—it could literally fly circles around a manned fighter. Moreover, unlike manned missions that are limited by human endurance, unmanned aircraft don’t get tired and could stay aloft with refueling for days on end. Since this type of “drone” doesn’t yet exist, it is fair to say that Musk was premature in declaring that the manned fighter era has “passed.” That said, an autonomous unmanned aircraft capable of dogfighting could certainly exist within a decade—at least from a technical perspective. Overcoming deeply rooted Air Force culture, bureaucratic intransigence, and ethical concerns, however, is another matter entirely.

This debate about dogfighting, however, runs contrary to the actual trend in air-to-air combat over the past half century, which is toward beyond visual range (BVR) engagement at progressively greater ranges. Since the 1990s, the majority of air-to-air kills have occurred well beyond the range of human visual acuity. Today, using the data collected by onboard sensors, computer algorithms identify and track threat aircraft at considerable distances (10s if not 100s of miles depending on the sensor and target aircraft), as well as plot fire control solutions for engaging them. The role of the pilot is, in essence, limited to pulling the trigger. Given the air-to-air missile’s speed and agility overmatch, once it leaves the rails, the probability of the target aircraft evading it kinematically is near zero. Building an unmanned aircraft with large apertures and long-range AAMs that could detect, shoot, and kill threat aircraft before being detected by them is technically feasible today. A future variant of the B-21, for example, could be adapted to serve in an air-to-air role.

To support their contention that AI-enabled unmanned aircraft are inherently unreliable, some fighter advocates have tried to redirect the debate, pointing out that Tesla cars have yet to achieve a full self-driving capability and last year their auto-pilot feature was supposedly responsible for a handful of accidents. From an AI perspective, driving takes place in an extremely complex environment with hundreds of moving cars and trucks, pedestrians, road hazards, obstacles, traffic lights, and on and on. The air domain, by comparison, is far less cluttered and dynamic. Even in the very challenging ground environment, however, Tesla cars are demonstrably safest when their auto-pilot is engaged and have an accident rate several times lower than the national average. Passenger airliners today, which are statistically very reliable in terms of flight safety, routinely fly themselves with highly advanced autopilot systems. Last summer, in fact, Airbus executives indicated that the technology was already in place to take pilots out of the cockpit safely, but the regulatory system and the travelling public’s perceptions had not yet caught up. Similarly, the U.S. military has already fielded unmanned aircraft that can take-off, fly, and land by themselves such as the RQ-4 Global Hawk and MQ-4C Triton. One prototype UAV, the X-47B, not only demonstrated the ability to take-off and land from a moving aircraft carrier at sea in 2013, but also the ability to refuel in-flight autonomously. Adding the functionality to unmanned aircraft to detect enemy aircraft and shoot long-range AAMs would be trivial given that these capabilities are already automated on manned aircraft.

Aside from the tactical performance advantages noted above, unmanned combat aircraft come with myriad other benefits: no risk to human pilots, no need for combat search and rescue, and no need to fly the aircraft constantly to maintain pilot proficiency. The more fundamental advantage, however, is that unmanned aviation can scale more easily because it doesn’t depend on recruiting, training, and retaining skilled pilots. In 2019, the Air Force was roughly 2,000 pilots short of its goal of 21,000. China too is having difficulty finding the human talent needed to grow the PLA Air Force. Unmanned combat aviation could eliminate that bottleneck and China could tap its economic strength to invest in the production system, or what Musk referred to as “the machine that makes the machines,” to manufacture unmanned combat aircraft at scale, potentially swamping the U.S. Air Force with sheer numbers.

From a technological perspective, unmanned air superiority aircraft optimized for BVR intercept could be fielded in the very near future, and unmanned aircraft capable of dogfighting, to the extent that even remains necessary, could easily follow within a decade. If the United States doesn’t exploit this opportunity, our adversaries likely will—either way, the manned “fighter jet era” is nearing its end.

At the AFA conference Musk also riffed on Henry Ford’s quote that “if I had asked people what they wanted, they would have said faster horses.” He then observed that “when it’s a radically new product, people don’t know they want it because it’s just not in their scope.” That is where the Air Force appears to be today with respect to air superiority. Rather than asking for a radically different solution, the Air Force appears to be asking for “faster horses” in the form of incremental improvements to manned fighters under the multi-billion-dollar Next Generation Air Dominance (NGAD) program. It’s time to reconceptualize air superiority and how it is attained.